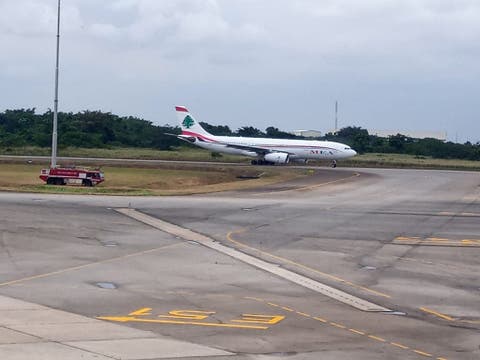 An aircraft operated by Middle East Airlines landed at the Murtala Muhammed International Airport, Lagos at exactly 2.27pm on Saturday, signaling the formal commencement of international air travel in Nigeria.

The nation’s airspace had been shut to international flights several months ago following the outbreak of the COVID-19 pandemic.

A visit to both airports, the only ones opened for the commencement of foreign travels at the moment showed beehive of activities as travelers were seen making frantic efforts to observe COVID-19 protocols before their travels.

In Lagos, the aircraft belonging to the Middle East Airlines was said to have taken off from Beirut, Lebanon.

Two other airlines including Delta and British Airways are also expected to begin flight operations at the airport today.

Earlier on Friday, an inspection team from the Lagos State Government visited the airport to ascertain its readiness to resume international flights.

They were led round the various facilities in the airport by the General Manager of the Federal Airports Authority of Nigeria, Capt Hamisu Yadudu and the airport manager, Victoria Shina-Aba, alongside other officials.

The FAAN boss had disclosed Friday that Middle East Airlines would operate the first flight into the country today.

READ ALSO  Adeboye to Critics: 'My messages are for my children'

All rights reserved. This post: 'Middle East Airlines plane lands in Lagos as Intl Flight operations begin' and other digital content on this website, may not be reproduced, published, broadcast, rewritten or redistributed in whole or in part without prior express written permission from Anambra City News.