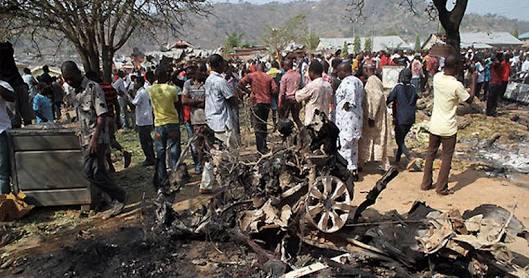 For some time Nigerians have on daily basis woken up to watch, read or hear of the massacre of innocent citizens in Southern Kaduna, while many have attributed the butchery to religion others believe it is Fulani herdsmen that is responsible for the terror while some others chose to take the extreme position by calling it ethnic cleansing, a sentiment I have tried very hard to convince myself not to share but the naked and gruesome reality is that murder, maiming, burning and carnage is currently happening in Southern Kaduna.
And in the midst of all the killings and bloodshed, I am yet to hear Mr. President make a statement or order for the deployment of soldiers to Southern Kaduna with a view to end the massacre. The residents of southern Kaduna have openly accused Kaduna state Governor Mallam Nasir Elrufai of complicity in the mindless murder taking place in the district and therefore do not expect protection or justice from the state, the residents of Southern Kaduna deserve to live not to be hacked to death and their bodies dismembered like some game.
Mr. President let me remind you that you are on oath to protect the lives of all Nigerians irrespective of tribe or religion, it is therefore disheartening that in the middle of all these killings and bloodshed the best that could come out of the presidency is an insensitive statement credited to Malam Garba Shehu, the Senior Special Assistant, Media and Publicity, to the President, on the 21st July 2020, “the problem in Southern Kaduna is an evil combination of politically-motivated banditry, revenge killings and mutual violence by criminal gangs acting on ethnic and religious grounds.”
Mr. President, I am startled that as tragic as all the violence and bloodletting happening in Southern Kaduna, which Nigerians irrespective of political, religious and ethnic leanings have condemned and Nigerian women marched the streets of Kaduna naked in protest which attracted international news and attention, not even a word has come from you.
Mr. President, it will be very convenient for me to assume that you are not aware, but if you are aware please rise to the occasion and save Southern Kaduna from the wickedness and mindless bloodshed currently ongoing and has reportedly claimed over 200 lives within a short period of time.
Mr. President, if and when you become aware rather than express “SHOCK” please use your powers and authority as the nation’s chief security officer and commander in chief of the armed forces to bring a closure to the mass murdering of innocent citizens of Southern Kaduna, they need your protection since they cannot get protection from their governor.
Mr. President incase you are not aware let me remind you that women and children are being killed and kidnapped, youths and the elderly are being slaughtered, peoples properties and houses are being burnt and destroyed, wives are being made widows, children are daily being turned to orphans, women raped in front of their husbands and children, tears and blood are flowing freely like a river in southern Kaduna.
Mr. President Are You Aware?
Aguoru
Writes From Umuahia