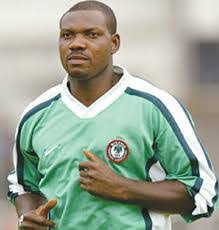 The football body stated this in a communique on Tuesday after its Executive Committee meeting. It said the appointment is with immediate effect.

The former Eagles defender was reportedly close to being appointed as coach of Malian giants and 2009 CAF Confederation Cup champions Stade Malian, before the appointment.

Eguavoen confirmed that he was negotiating with the Malians, but added that he would return home if given a job.

“I have a lot to offer to Nigerian football but I can’t just sit at home.

“So, when this (Stade Malian) opportunity came I had to take it but the slightest chance I have to come back to my country, I will come back. I will come back for sure because I love Nigeria,” Eguavoen told The PUNCH.

The 55-year-old represented Nigeria at the 1994 World Cup, winning the African Cup of Nations same year, before calling it quits with the national team after the France 1998 World Cup. He started his coaching career in Malta with Sliema Wanderers in 2000 and guided them to a second-place finish same season.