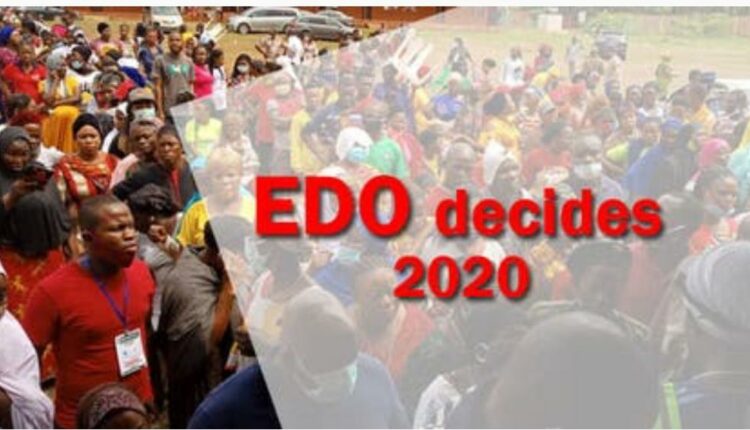 The former National Publicity Secretary of the defunct nPDP and stalwart of the All Progressives Congress (APC), Chief Eze Chukwuemeka Eze says Comrade Adams Oshiomhole was the major reason why the APC lost last Saturday’s gubernatorial election in Edo state.

He said Oshiomhole’s “unpleasant carriage and incoherent disposition” accounted mainly for the loss.

The incumbent governor and candidate of the PDP, Godwin Obaseki was declared winner of the election by the INEC.

In a statement titled “Press release” regretted that Edo State has been added to the league of states like Zamafara, Rivers, Bauchi, Bayelsa, Benue, Sokoto, Adamawa, and Oyo that are being governed by the PDP.

He claimed that it was Oshiomhole’s “self-styled and kooky steering model” that scuttled APC’s electoral chances and deprived the majority of having their way.

He said Oshiomhole must apologise to President Muhammadu Buhari and members of the APC for “the serial embarrassments and heavy damages occasioned by his hinky and very quirky carriage.”

“While appealing to Obaseki to find a place in his heart to forgive Oshiomhole and all those who helped him cause havoc in the APC, Chief Eze tasked the Edo State Governor to begin the process of taking back his position in the progressives family which he described as his natural habitat considering his numerous sacrifices and contributions in the formation of the party, assuring him that his place in the APC is still very much reserved and intact.

“Eze further hailed the good people of Edo State for demonstrating character and displaying their resolve to guard jealously and protect the funds and economy of the state from external hawkers who are shopping for opportunities to extend the boundaries of their squandermania and slavery spirit to other territories.

“The APC stalwart counselled the candidate of the APC in the just concluded Edo election, Pastor Ize-Iyamu, to prevail on Oshiomhole to offset all his electoral expenses, seeing that it was his damaging campaign against him as well as his poor leadership mannerisms that caused him and the APC the election.

“Eze joined President Muhammadu Buhari in commending INEC and security agencies for displaying a high degree of competence and professionalism which translated into a peaceful and very successful electoral outing.

“He called on Nigerians to commend the President for allowing a transparent process, describing him as a true statesman and democrat.

“Eze said with this record, President Buhari has equaled the democratic feat of Dr. Goodluck Jonathan, who allowed the votes of Edo people to count in 2012 when Adams Oshiomhole was re-elected as the state governor against all odds.”

BBNaija Lockdown: Why I refused Ozo’s love advances by Nengi