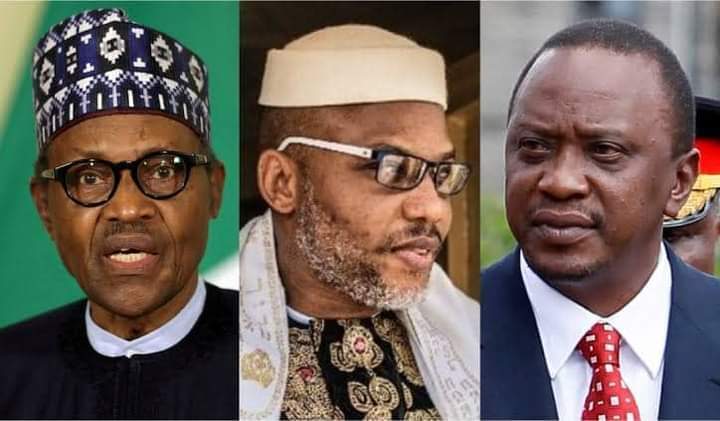 “It was later reported that during his enforced disappearance, Mr. Kanu has been arrested at the airport’s parking, by a group of armed men in uniform believed to be Kenyan officials, without warrant or judicial order, who handcuffed and blindfolded him and pushed him into a vehicle. He was then taken to a private house, where he was detained for 8 days and subjected to torture and ill-treatment. During this period, Mr. Kanu was chained to the floor at all times, regularly beaten, with a cloth over his mouth to prevent him from screaming, taunted and called a “terrorist Jew Biafran”, denied access to bath and toilet, requiring him to urinate and defecate where he was chained, and fed on bread and water once a day.”—-UN Document Reveals.

The United Nations Special Rapporteur on torture and other cruel, inhuman or degrading treatment or punishment, in a document with headline ‘Urgent Appeals’ to Nigeria, Kenya, has demanded Nigeria and Kenyan government to respond urgently on the below 6 demands regarding the abduction and rendition of Nnamdi Kanu the leader of Indigenous people of Biafra IPOB. The UN documents as obtained by Family Writers Press International reads:

“1. Please provide detailed information on the circumstances under which Mr. Kanu was arrested, forcibly disappeared before being handed over to Nigerian authorities and transferred from Nairobi to Abuja.”

See also  FinCEN: I’m not under any US surveillance- Atiku

“3. Please provide detailed information on the factual and legal grounds of the arrest and detention of Mr. Kanu, as well as formal charges against him, and the legal provisions used to charge him.”

“4. Please provide full information on the period between 19 – 29 June 2021, during which Mr. Kanu was subjected to enforced disappearance, including his whereabouts and the conditions in which he was held, on the informal detention facilities during this period and explain how this is compatible with the international human rights obligations of Kenya. Please provide information on whether an investigation was carried out into the alleged enforced disapperance of Mr. Kanu during this period of time, and whether those responsible have been held accountable.”

“5. Please provide detailed information, where available, on risk assessment carried out by the Kenyan authorities to ascertain the risk Mr. Kanu may incur, including being subjected to torture or cruel, inhuman or degrading treatment or punishment as well as arbitrary detention upon his extradition to Nigeria, and how this assessment is compatible with the international standards.”

“6. Please provide information on the measures taken to investigate the above-mentioned allegations of torture and ill-treatment perpetrated against Mr. Kanu during his detention in Kenya and to hold those responsible accountable.”

“We would like to inform your Excellency’s Government that after having transmitted this joint communication to the Government, the Working Group on Arbitrary Detention may transmit the case through its regular procedure in order to render an opinion on whether the deprivation of liberty was arbitrary or not. This letter of allegations in no way prejudges any opinion the Working Group may render. The Government is required to respond separately to the letter of allegations procedure and the regular procedure.

While awaiting a reply, we urge that all necessary measures be taken to prevent the re-occurrence of similar violations, to investigate the above-mentioned allegations, and in the event that the investigations support or suggest the allegations to be correct, to ensure the accountability of any person responsible of the alleged violations.

The allegations in the case of Mr. Kanu raise serious violations of international human rights law and may cause irreparable damage to his life or personal integrity, which we believe warrants prompt attention. In this regard, we are considering to publicly express our concerns in this case in the near future, believing that the wider public should be informed about the implications of these allegations for the enjoyment and exercise of human rights in Kenya and Nigeria. Any public expression of concern in this regard, will indicate that we have been in contact with your Excellency’s Government to clarify the issue/s in question.

This communication and any response received from your Excellency’s Government will be made public via the communications reporting website within 60 days. They will also subsequently be made available in the usual report to be presented to the Human Rights Council.

Please note that a letter expressing similar concerns is being sent to the Governments of Nigeria and the United Kingdom.” 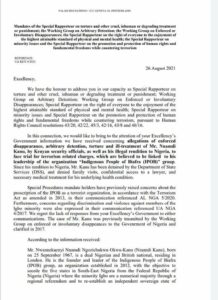 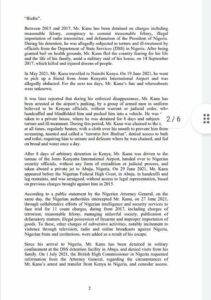 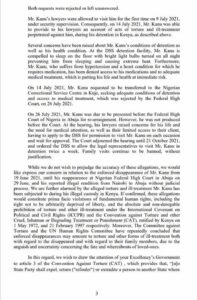 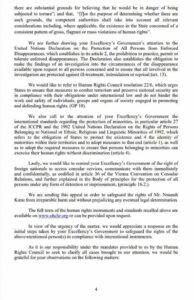 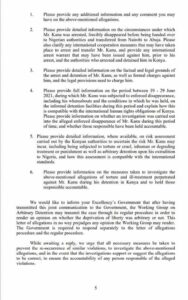 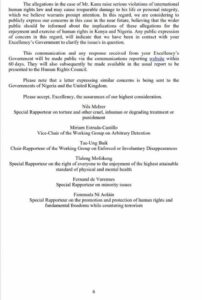