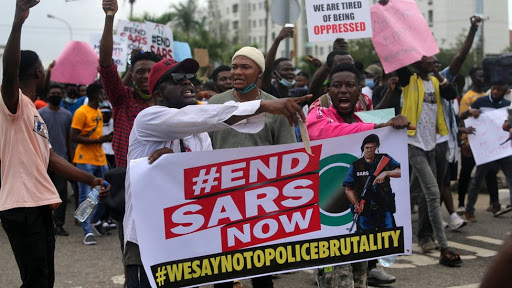 Hours after the Senate and the Nigeria Union of Journalists (NUJ) asked President Muhammadu Buhari to break his silence in the ongoing nationwide protests, the president later on Tuesday met with the Chief of Defence Staff, General Gabriel Olonisakin and the Minister of Defense, Major General Bashir Magashi (retd) , at the Presidential Villa, Abuja.

Though, details of the meeting were not clear as at press time, sources within the State House hinted that it may not be unconnected to the escalating violence trailing the #EndSARS protests.

This came as the ongoing #EndSARS protests degenerated into bloody violence in different parts of the country, leaving many dead and property worth millions of naira destroyed.

What started as a genuine protest has been infiltrated by hoodlums, who not only attack the protesters but also destroy and loot property.

President Buhari and State Governors had been taking steps to meet the initial five-point demand of the protesters, the actions have refused to be doused, generating new demands daily.

The President on Monday said that the youths have the fundamental rights to protest and make demands from their leaders, he advised that they should not allow their genuine concerns to be hijacked by hoodlums.

President Buhari appealed to #EndSARS protesters to give the federal government time to address their demands as the team set up has already gone to work.

The Minister of Youth and Sports, Mr. Sunday Dare, who disclosed this to journalists after meeting with the President said that Buhari at the meeting said that the youths of the country have spoken and that he has heard and he has since gone to work for the youths of our country.