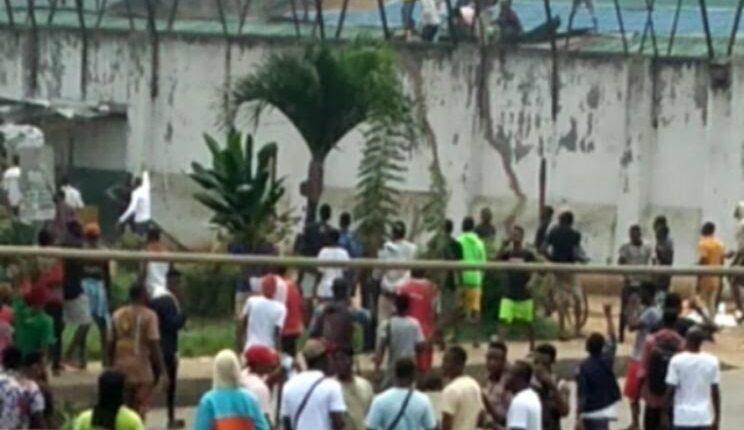 Ne fewer than 1,993 inmates were freed from the Benin and Oko custodial facilities, Edo State, by suspected hoodlums on Monday, the federal government has said.

Government made the disclosure in a statement on Tuesday, by the Director, Press and Public Relations, Ministry of Interior, Mohammed Manga, titled, ‘Unconscionable attack on custodial facilities,’ accused the #EndSARS protesters in Edo State of masterminding the attack.’

Some hoodlums had on Monday attacked the custodial centres, freed the inmates and also looted the armoury of a nearby police station, carting away five rifles.

The police said 12 suspects have been arrested in connection with the incident while the stolen rifles had been recovered.

But in the statement, Manga said “Two NCoS custodial centres in Benin City and Oko in Edo State were attacked yesterday (Monday) by protesters purportedly under the #ENDSARS aegis, freeing (at the last count) 1,993 inmates in legal custody and looting the centres, including the weapons in their armoury.”

“They came in large numbers, bearing dangerous weapons and attacked the officers on guard duty. They were unmistakable on their mission, which was to force the cells open, free the inmates and carry out other nefarious activities,” it noted.

The FG said the situation has been brought under control while security around the custodial centres nationwide had been beefed up.

“Investigation has commenced to determine the full impact of the attack,” it stated.

The government said while peaceful protests were legitimate and guaranteed as a fundamental right of citizens, criminality should be condemned.

The statement noted that most of the inmates held at the centres are convicted criminals serving terms for various criminal offences, awaiting execution or standing trial for violent crimes.

It added that their being let loose imperilled lives and property, and was a threat to national and communal security.