DSS invitation: I am ready to die for Nigerians… Mailafia 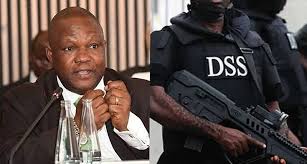 ‎A former Deputy Governor of Central Bank of Nigeria (CBN), Dr Obadiah Mailafia, has said he is ready to die for Nigerians. ‎

Mailafia on Monday honoured an invitation from the Department of State Security (DSS), ‎for the third time.‎

Mailafia ‎is being investigated by the DSS for alleging that a serving governor of one of the Northern states was a commander of Boko Haram.

The police has also invited him over the development.

Speaking with journalists on Monday, Mailafia expressed his readiness to become a matyr.

‎“I am ready to perish for speaking the mind of millions of Nigerians over the incessant killings of innocent citizens going on presently in the country.‎

“I don’t know why I have been invited again this is the third time that they are inviting me to their office and I am honouring it.‎

“There has not been any instances that warrant any crises in the country after the interview which I granted a radio station in Lagos.”

The DSS had claimed that Maila‎fia’s allegation was part of plans by some influential Nigerians to destabilise the country.

‎Two herdsmen arrested for raping teenager during robbery in Ogun