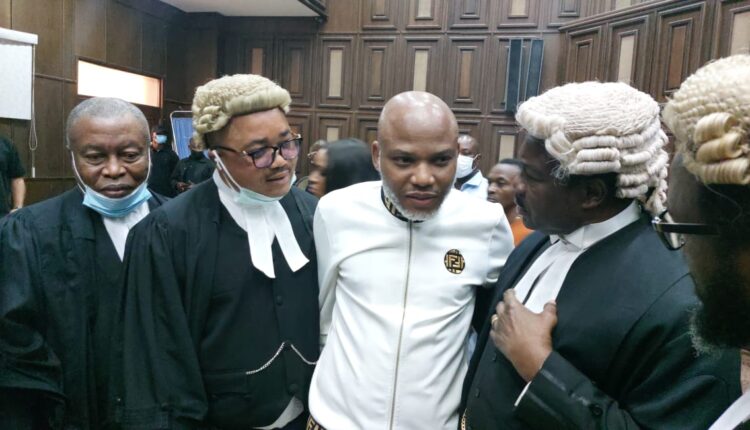 Justice E.N Anyadike of a Federal High Court sitting in Umuahia, the Abia State capital, today October 26, ordered the Federal Government to return the leader of the Indigenous People of Biafra, Nnamdi Kanu to Kenya from where he was extradited and pay him the sum of N500 million as damages following his illegal abduction and human rights abuse from Kenya.

Recall that Kanu was extradited from Kenya to Nigeria on June 19, 2021.

The Court presided by Justice E . N Anyadike, insisted that the extradition of Kanu from Kenya without recourse to the legal process was a flagrant abuse of his fundamental human rights.

Kanu, through his counsel, Aloy Ejimakor, had approached the court challenging his extradition from Kenya on June 19, 2022. Ejimakor told the court that the suit is sui generis (of a special class) and was primarily aimed at redressing the infamous unlawful expulsion or extraordinary rendition of Kanu, which is a clear violation of his fundamental rights under Article 12(4) of the African Charter on Human and Peoples Rights, as well as Chapter IV of the Nigerian Constitution.

‘In addition to the rendition, I am asking the Court to redress the myriad violations that came with the rendition, such as the torture, the unlawful detention and the denial of the right to fair hearing which is required by law before anybody can be expelled from one country to the other.

I am also seeking to halt his prosecution and restore him to the status quo before his rendition on 19th June 2021.

You will recall that on January 19, 2022, the High Court of Abia State decided that portion of violation of Kanu’s fundamental rights that occurred in 2017. Even as I had made claims that bordered on rendition, the Court declined jurisdiction on grounds that rendition, being related to extradition, lies within the exclusive jurisdiction of the Federal High Court. This is what informed my decision to initiate the suit before the Federal High Court.

To be sure, the extraordinary rendition of Nnamdi Kanu, triggered myriad legal questions that cut across multiple jurisdictions in Nigeria and even triggered the international legal order, to boot. In other words, the rendition has expanded the matter of Kanu far beyond the realms of the Abuja trial and opened up new legal frontiers that must be ventilated to the hilt before other courts and tribunals within and without Nigeria.

Thus, this very case before the Federal High Court in Umuahia is one of such that is aimed at seeking a definitive judicial pronouncement on the constitutionality of the extraordinary rendition. The ones in the United Kingdom, Kenya, African Union, and the United Nations are in addition”.

He argued that the federal government should be required to show the legal document or authority that served as the foundation for his “abduction or extraordinary rendition.” Among the several reliefs sought, Kanu through his counsel asked the court for “an order mandating and compelling the respondents to pay the sum of N25,000,000,000.00 (Twenty-Five Billion Naira) to the applicant, being monetary damages claimed by the applicant against the respondents jointly and severally for the physical, mental, emotional, psychological, property and other damages suffered by the applicant as a result of the infringements of applicant’s fundamental rights by the respondents”.

Delivering a ruling on the suit, the presiding judge held that the extradition of Kanu from Kenya without recourse to the legal process was a flagrant abuse of his fundamental human rights. She also held that the respondent failed to disprove the claims of the applicant that he was arrested, blindfolded, tortured, and chained to the ground for eight days in Kenya before his extradition.

This verdict is coming barely a week after the court of appeal in Abuja discharged Kanu on charges of terrorism on the grounds that he was illegally renditioned to Nigeria.