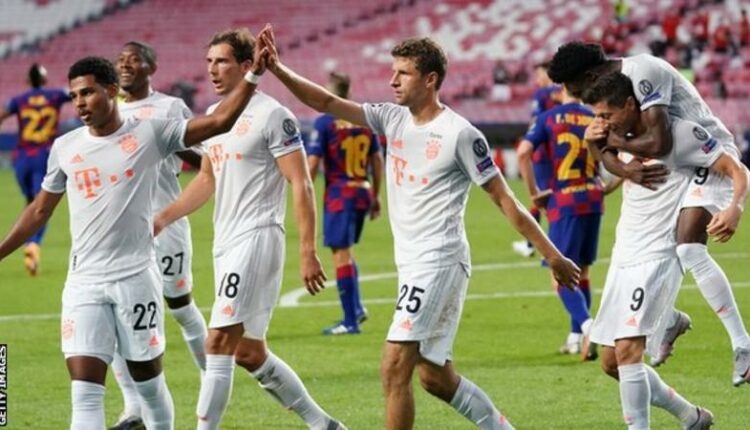 Bayern Munich clearly sent out an emphatic and ominous message to their Champions League rivals with an absolute demolition of fellow European heavyweights Barcelona in a gloriously chaotic and utterly one-sided quarter-final tie in Lisbon. 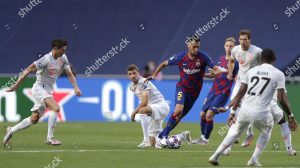 The high-pressing, energetic and ruthless German champions were on a different level to their Spanish rivals, as they have been for pretty much every opponent they have faced in Europe this season and in every competition since football restarted in June.

They scored four times in the first half, added another quartet in the second, and could easily have netted more against a shell-shocked and shambolic Barca side whose defensive errors were too numerous to recount and who now have a new and embarrassing record defeat in European competition to their name.

Bayern were not entirely infallible, though, with Barca’s forward players – inevitably led by Lionel Messi and Luis Suarez – regularly finding space in behind to cause problems and test Manuel Neuer. 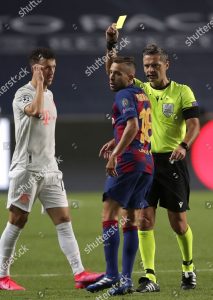 In a dizzyingly madcap opening 10 minutes, Thomas Muller fired Bayern ahead following a one-two with Robert Lewandowski and David Alaba wildly sliced a Jordi Alba cross into his own net to restore parity, before Suarez was denied by Neuer and Messi hit the post with a curling cross through a packed box.

The following 22 minutes took the game away from Barca, with Ivan Perisic smashing in a deflected second for Bayern before Serge Gnabry finished off a delightful ball over the top from Leon Goretzka, and Muller poked in his second at the near post.

A neat turn and finish from Suarez after the break gave the Spanish side hope, but this was snuffed out by arguably the pick of the goals – a Joshua Kimmich side-foot finish following some stunning skill and speed and excellent delivery from Alphonse Davies.

Robert Lewandowski headed his 14th Champions League goal in just eight games before salt was poured into Barca’s deep wounds as Philippe Coutinho – on loan from the Spanish side – netted a seventh and eighth after coming off the bench. 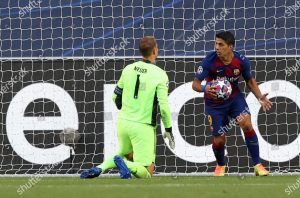 Bayern are by far the most decorated side left in the competition, having won the European Cup/Champions League on five occasions, most recently in 2013. 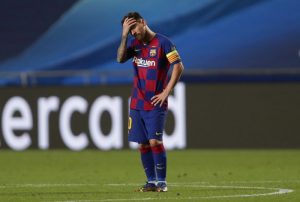 They will find out their semi-final opponent on Saturday, when England’s last remaining challenger Manchester City face French side Lyon.

All rights reserved. This post: 'Bayern score eight to dismember dismal Barca' and other digital content on this website, may not be reproduced, published, broadcast, rewritten or redistributed in whole or in part without prior express written permission from Anambra City News.

Thanks for reading!
READ ALSO  Barca President confirms Koeman will be next coach