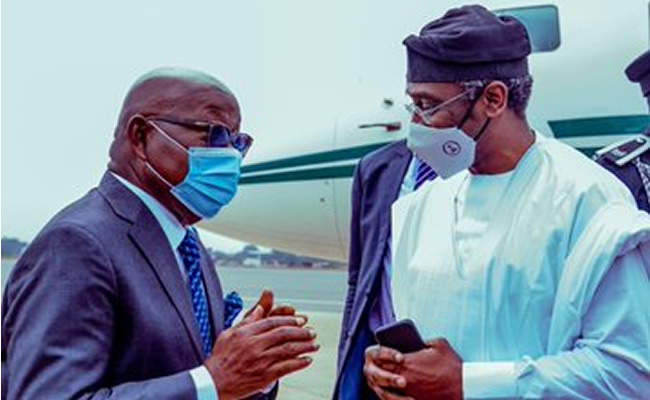 The Speaker of the House of Representatives, Femi Gbajabiamila, arrived Accra Ghana, Wednesday afternoon to wade into the crisis which emanated from the $1m levy imposed on Nigerian traders.

The speaker announced his arrival via his Twitter handle.

“Initial meeting with my host the Speaker of Ghanian Parliament who met me at the airport Hon Prof Mike Oquaye. We will meet again this evening,” he tweeted.

Recall that the speaker had told State House correspondents at the end of a meeting he had with the President Muhammadu Buhari at the Presidential Villa on Tuesday that he had received Buhari’s nod to embark on the trip.

Minister of Information and Culture, Lai Mohammed, had last week lamented the treatment being meted out to Nigerians in Ghana, insisting that government would no longer accept such humiliation.

Ghananian authorities had since responded to the statement, saying Mohammed’s claims on the issue and previous ones were inaccurate.

But Gbajabiamila said he would be embarking on what he called “legislative diplomacy” to Ghana.

Gbajabiamila, who had earlier said the closure of Nigerian shops in Ghana contravened Economic Community of West African States trade protocols, told reporters that he would find a way forward during his trip.

“I am leaving for Ghana tomorrow (Wednesday) to meet with the Speaker of the parliament in Ghana to look at the issues on ground as they affect our citizens, and to try and calm things down.

“I informed the President and he is aware of every single step that we are taking, and we hope that we will come to an amicable settlement one way or the other.

Gbajabiamila recalled that he had led a similar delegation to South Africa at the peak of a crisis involving Nigerians there.

“It is called legislative diplomacy. If you remember very well, during the days when I was Leader of the House, I led the delegation to South Africa during the crisis there with Nigerians and we were able to accomplish quite a bit, to simmer things down at that time,” he said.

Gbajabiamila said the President was happy about his trip.