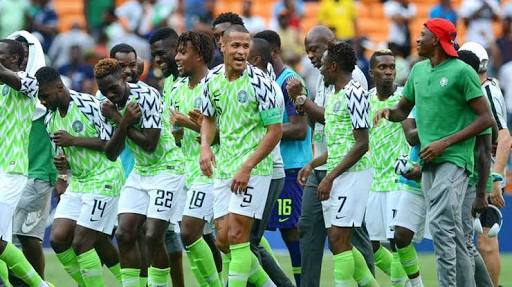 The two matches will ‎take place in Austria.

Chairman of the Nigerian Football Federation, Amaju Pinnick, disclosed this on Twitter on Wednesday.

Pinnick, who gave an update on unfolding developments in Nigerian football, also disclosed that the head of NFF’s ICT department, Mr Tolulope Abe, has died due to complications from surgery, while four staff of the organisation tested positive for COVID -19.

Pinnick said, ‎”As part of our commitment to transparency, probity and openness, I would like to brief Nigerians of events as they unfold in football development.

“Firstly, a tragic note, as we lost the head of the ICT department, Mr. Tolulope Abe to complications arising from ‎surgery. May His soul rest in Peace.

“We also conducted COVID-19 tests on all members of staff and four returned positive. While one has fully recovered and confirmed negative, others are in stable condition, receiving treatment with the full compliments of the NCDC.‎

“Now. As we await the Federal Government’s pronouncement on the resumption of football, the Federation has been in active discussions about possible friendly matches and I’m happy to say we have finally sealed two high profile matches for next month.‎

“On the 9th of October, the Super Eagles will play former African champions, Cote D’Ivoire in a friendly game, then face another African giant and former champions Tunisia, four days later, on the 13th.

“Both games will be held in Austria for a few obvious reasons.‎

“Due to the COVID-19 protocols presently in place and the proximity of the bulk of our team as well, Austria was seen as an ideal venue. I’ll have to stress as well, that ALL costs will be borne by the Football Federations of both Nigeria and Cote D’Ivoire, as well as Tunisia.‎

“On the vacant positions in Nigerian football, I’m hopeful that a Technical Director will be announced soon, as we are still having extensive consultations.

“With regards to a Coach for the Super Falcons, Africa’s biggest female football team, Phillips Consulting, in charge of the recruitment process, are putting finishing touches to it and a Coach will be announced soon. This also applies to Coaches for the different cadres of our National Teams.

“I’d like to ask that you tarry with us a while.

“On the home scene, we have been working diligently to develop the league and I’m happy to say the League Management Company has signed a massive deal with a reputable organisation that should see the clubs and the league get empowered.

“Also, the vacant position of the ‎Chief Executive Officer for the league has been filled and will be announced in the coming days.

“A few days ago, top members of the NFF Executive Committee had a vrtual meeting with NIKE, our kit makers, with regards to the new kits for the 2022 World Cup and all I can say now is: Wow.

“The new designs are truly beautiful and will thrill the world again.

“Sincerely I cannot wait to see our male and female teams adorn them.”
‎
Noting that the NFF will not take the ‎support given to Super Eagles by Nigerians for granted‎, Pinnick said the “dream is to conquer Africa at the next Nations Cup and qualify for the World Cup in 2022”.
‎