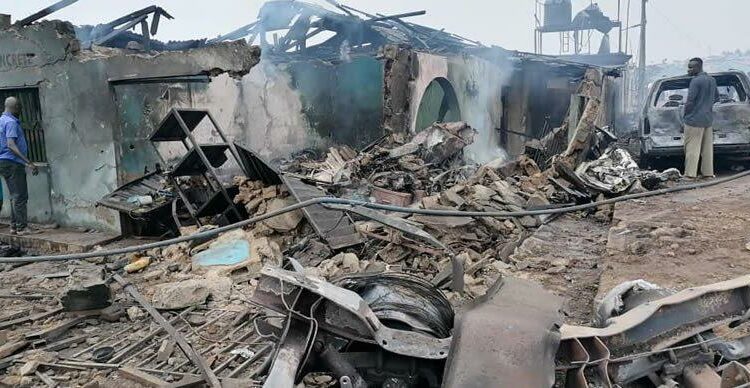 Barely 24-hours after 23 persons died in a Lakota tanker explosion, several people were on Thursday severely injured in a gas explosion that occurred at Iju Ishaga, Lagos State.

Apart from those injured, many vehicles were also burnt, while some buildings around the scene of the explosion suffered partial collapse.

A source close to the scene of the tragic incident said “We just heard a loud sound around 03.30 pm and we suddenly began to see smoke. The explosion is massive and we are not sure of the casualties, but many people are injured.”

The spokesperson for the Lagos State Emergency Agency, Nosa Okunbor, confirmed the incident.

He noted that emergency responders have arrived at the scene of the incident.

He said, “On arrival at the scene, it was observed that there was a gas explosion.

“Further investigation revealed that a truck had a lone accident and exploded.

“The impact of the explosion affected adjoining buildings and several vehicles were burnt.

“Several persons were injured and have been taken to the nearest hospital for treatment.”

Okubor added that an event centre and a plank market were also destroyed.

“It was confirmed that a 30 ton LPG Tanker being operated by Mana Gas Ltd was involved in an explosion which destroyed several vehicles, X and Y Event Center and a plank market in the above-mentioned axis,” he added.

All rights reserved. This post: 'Several injured as gas explodes in Lagos community' and other digital content on this website, may not be reproduced, published, broadcast, rewritten or redistributed in whole or in part without prior express written permission from Anambra City News.

Buhari justifies CAMA law, insists, it will help in fight against graft