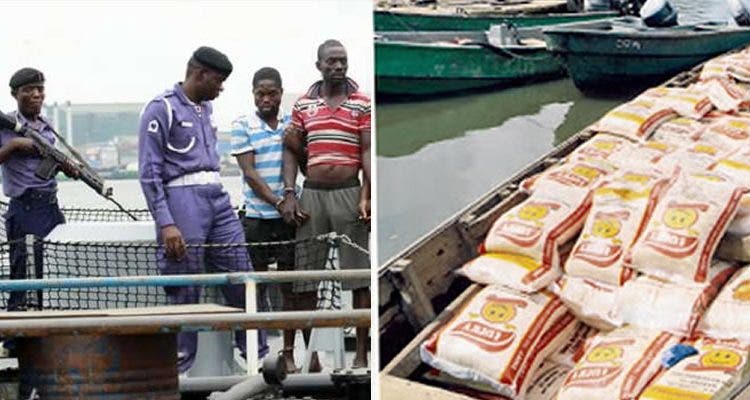 No fewer than eight suspected rice smugglers have been arrested, while 1522 bags of foreign rice valued at N73 million seized in separate operations operatives of the Nigerian Navy Ship Victory.

The Commander of NNS Victory, Commodore Idi Abbas who made the disclosure while handing over the suspects and the seized goods to the Nigeria Customs in Calabar, Cross-river state said among the suspects was a 16-year old.

He said that in the first operation last Friday, the patrol team intercepted two fibre boats while approaching Parrot Island each laden with about forty bags of foreign parboiled rice suspected to be smuggled from Cameroon.

He said each of the fibre boats had two crew members, making a total of four persons. The suspects, who are all Nigerians, were identified as Orisamakin Ademibo, Victor Effiong Iseme, Bassey Sunday and Joseph Asuquo.

In the second operation on Sunday, August 30, Commodore Abbas said, NNS Victory patrol team on routine patrol round Tom Shot Island Breakwaters by Agbana-West along Calabar Channel intercepted and arrested a wooden boat laden with 1482 bags of foreign parboiled rice suspected to have been smuggled from Cameroon.

“The wooden boat smuggled the bags of rice from Dimbola Fishing Port in Limbe in the Republic of Cameroon and destined for Oron in Akwa Ibom State before the interception and eventual arrest. The boat had four crew members, all Nigerians,” he said.

He said since June when he took over, several arrests had been made, including 11 suspects, five boats, eight outboard engines and over 2000 bags of foreign parboiled rice, adding that the estimated street value of the seizure is N113.6m.

Commodore Abbas warned, “those with criminal act or intent to desist from such act as the Base is ever ready to curb criminalities and illegalities within own area of operation.”