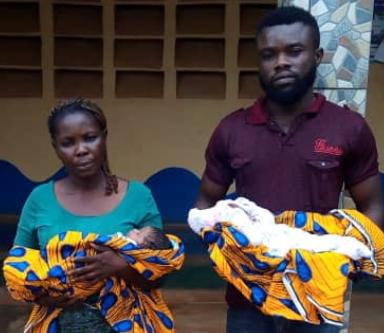 A 31-year-old man, Chijioke Chukwulota, has been arrested by the police in Anambra for allegedly selling twin babies of his ex-girlfriend.‎

Police Public Relations Officer, Anambra Police Command, Haruna Mohammed, who disclosed this in a statement on Tuesday,‎ said the suspect sold the twin babies for N150,000 to a child trafficking syndicate.

It was gathered that the suspect was the one that impregnated the ex-girlfriend.

The police spokesman said two suspects had been arrested and the babies rescued.

“The suspect lured his ex-girlfriend whom he allegedly impregnated and stole the twin baby girls, aged about two months after she gave birth to them through a cesarean section and sold same children to one Tina Ibeato, 31, of Imo State at N150,000.

“The two suspects have been arrested and the children recovered in good condition.

Further investigation is ongoing, and the suspects would be prosecuted, Mohammed added.

All rights reserved. This post: 'Man sells ex-girlfriend’s twin babies for N150,000‎' and other digital content on this website, may not be reproduced, published, broadcast, rewritten or redistributed in whole or in part without prior express written permission from Anambra City News.

Thanks for reading!
READ ALSO  UK officially in recession, first time in 11 years