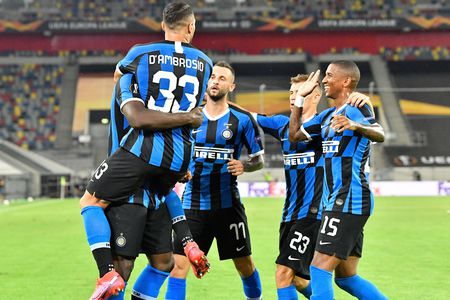 Romelu Lukaku and Lautaro Martinez both scored twice as Inter Milan hammered Shakhtar Donetsk in Dusseldorf to set up a Europa League final showdown with Sevilla.

Martinez struck his first in the 19th minute, heading in from Nicolo Barella’s cross after the midfielder had been gifted possession from a dire attempted clearance by Shakhtar goalkeeper Andriy Pyatov.

Former Manchester United striker Lukaku has now scored in 10 straight Europa League games and has 33 goals for the season.

Shakhtar’s only real chance was admittedly a very good one, but Junior Moraes headed straight at Samir Handanovic from just a few yards out for what would have been an equaliser.

Having missed out on the Serie A title by a single point, Inter now have the chance to claim a first trophy since 2011 when they face Julen Lopetegui’s Sevilla on Friday.

Inter are a rejuvenated club, with a team full of players seeking redemption and a manager looking to restore his reputation.

It has been a barren nine seasons since they claimed the Club World Cup and Coppa Italia in 2010-11.

But Antonio Conte, who was sacked by Chelsea in July 2018, has taken a squad containing discarded Manchester United trio Lukaku, Alexis Sanchez and Ashley Young, as well as ex-Tottenham midfielder Christian Eriksen and on-loan Chelsea wing-back Victor Moses, and forged a whole greater than the sum of its parts.

One of those parts, though, is having a truly stellar campaign to prove all his doubters wrong.

Lukaku was surplus to requirements at the Red Devils but has made himself indispensable with the Nerazzurri with his pace, power and accurate finishing – qualities that have enabled him to be involved in 18 goals in his last 10 Europa League games (14 goals and four assists).

Another goal in the final and he will match the achievement of Brazilian striker Ronaldo, whose 34 goals in all competitions in 1997-98 is the most by an Inter player in their debut season at the club.

What Shakhtar would have given for a striker of Lukaku’s calibre, even if just for one moment in the 63rd minute when somehow Moraes failed to find a way past the Inter keeper with his header.

For all their possession – 63% of it in the game – Luis Castro’s side often looked bereft of ideas in the final third, despite some neat touches from their predominantly Brazilian front quartet to get them there.

The Ukrainian champions had beaten Benfica, Wolfsburg and Basel to reach this stage and were 11 games unbeaten coming into the tie, but limply bow out.

Inter head into their 10th European final unbeaten in 11 games themselves and full of confidence.