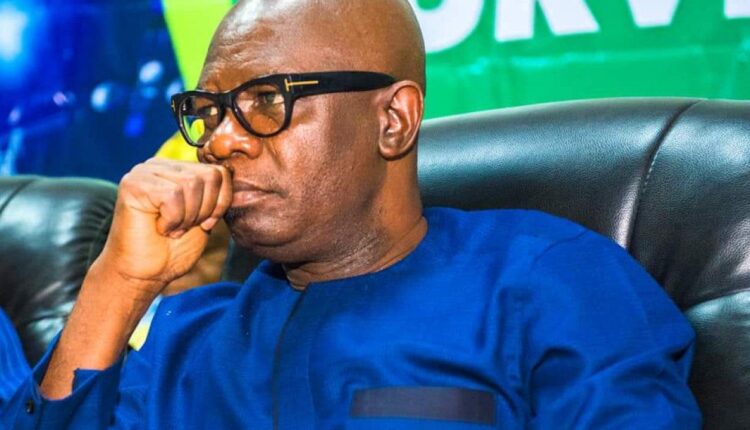 In obvious determination to be on the ballot ahead of the forthcoming Governorship election in Ondo State, embattled Deputy Governor of the state, Agboola Ajayi has again dumped the Peoples Democratic Party (PDP) few weeks after also decamping from the All Progressives Congress (APC).

Ajayi, who lost the primary of the PDP to Mr Eyitayo Jegede, was said to have sent the letter of resignation to the PDP secretariat at Apoi Ward 2 in Kiribo town, Ese Odo Local Government Area of Ondo State on Monday.

There were strong indications that he may be defecting to the Zenith Labour Party (ZLP) possibly before close of work on Monday.

While thanking the national leadership and members of the PDP for their warm reception and acceptance in the short period he rejoined the party, Ajayi said his decision was based on the call from his people, that he should contest the forthcoming governorship election in the state.

It was gathered that the PDP in the ward, under the chairmanship of Mr Festus Oboro, acknowledged the receipt of the resignation letter.

The Chief Press Secretary to the deputy governor, Mr Tope Okeowo, confirmed the development to our correspondent.

“The deputy governor has resigned and would declare his defection to the Zenith Labour Party before the end of the work,” Okeowo stated.

However, the state PDP said the exit of Ajayi would not have any effect on the chance of the party in winning the governorship election. The party said the action of the deputy governor showed he was a desperate politician.

In a statement issued by the Publicity Secretary of the PDP, Mr Kennedy Peretei, the PDP declared that it remained solid, strong, and more determined than ever before to win the election.

The statement read, “Agboola Ajayi has abused the welcome and privilege accorded him by our party supporters during his brief stay in the party.

“He also proved that he is desperate to become the governor of Ondo State. In the days to come, it will dawn on him that, he has squandered whatever was remaining in his goodwill with this decision.”