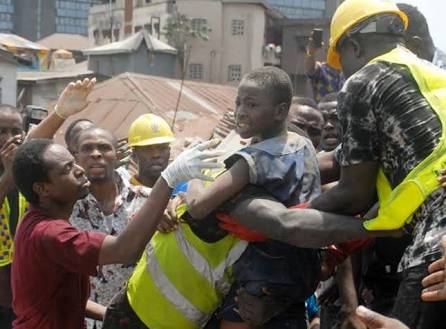 No fewer than four persons have been confirmed dead following the collapse of a three-storey building in the Obalende area of Lagos Island, Lagos State, on Sunday. ‎

Also, a yet to be determined number of people sustained varying degrees of injuries in the incident.

He said‎ the cause of the collapse is yet to be ascertained as of the time of filing this report. ‎

Parts of a statement issued by Oke-Osanyintolu said, “As of 05:40pm, a total of eight people (all males) have been extricated alive by the LASEMA Response Team and other stakeholders, and have been attended and quickly transferred to the hospital by LASEMA paramedics for further medical attention at Lagos Island General Hospital.

“Four persons (three males and one female) have so far been recovered dead and handed over to SEHMU at the incident scene.”‎

All rights reserved. This post: 'Four die as building collapses in Obalende, Lagos ‎' and other digital content on this website, may not be reproduced, published, broadcast, rewritten or redistributed in whole or in part without prior express written permission from Anambra City News.