Esama of Benin an enigma, icon worthy of emulation – Obaseki 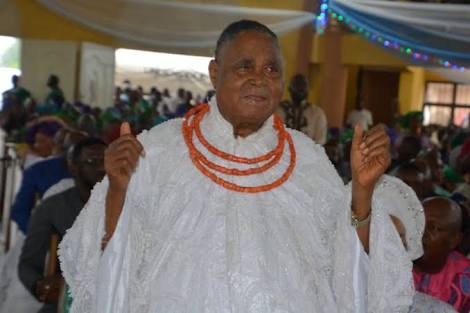 The Edo State Governor and candidate of the Peoples Democratic Party (PDP), Mr. Godwin Obaseki, has described the Esama of Benin Kingdom, Chief Sir. Dr. Gabriel Igbinedion, as an enigma and icon worthy of emulation by the younger generation, hailing his numerous contributions to the development of the state and nation.

Speaking at a special thanksgiving service to celebrate the 86th birthday of the Esama of Benin at St. Gabriel the Archangel Catholic Church in Benin City, Obaseki reassured that his government, party and supporters will continue to embrace peace ahead of the September 19, 2020 gubernatorial election in the state.

The governor said, “We thank God for your life and what you have been to us in Edo State and Nigeria at large. Thank God for the value you have continued to represent over the decades.

Earlier in his homily, the Bishop of Benin Archdiocese and President of Catholic Bishop Conference of Nigeria, Archbishop Augustine Akubueze, urged the electoral umpire, the Independent National Electoral Commission (INEC) to remain unbiased and ensure the conduct of a free, fair and credible election in the state.

The Archbishop described the Esama of Benin as an icon of unity for successfully bringing the gubernatorial candidates of the PDP and All Progressives Congress (APC) together, urging their supporters to play by the rules and ensure a violence-free election on September 19, 2020.

According to him, “I call on the political umpire to remain neutral, ensure that the votes of the electorate count to allow the people decide who governs them come September 19, 2020.

“The Esama is a friend to Pastor Osagie Ize-Iyamu and also to Governor Godwin Obaseki and has brought them together in unity. The Esama has become a symbol of unity. I call on all their followers to embrace peace and ensure that the September 19, 2020 governorship election in the state is violence-free.”

Thanking God for the life of the celebrant, Chief Igbinedion, the Bishop said old age is a blessing from God, charging the people to respect the elderly and treat them with due regard.

The Archbishop commended the Esama of Benin for his philanthropic gesture as he has touched many lives across the state and country, urging the parishioners to be their brothers’ keepers.