Edo 2020: We are sure of victory, Obaseki assures as PDP rounds off campaign 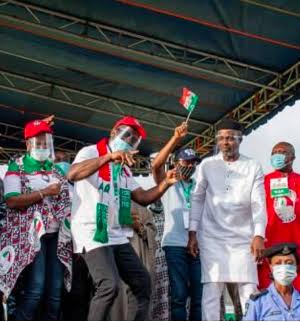 The Edo State Governor and candidate of the Peoples Democratic Party (PDP), Godwin Obaseki on Tuesday, declared that with the support of Edo people and endorsements by over 100 groups in the state, he is certain of victory in Saturday’s gubernatorial election in the state.
The governor who gave the assurance at the final reelection campaign rally in Benin City, urged eligible voters in the state to come out en masse to vote the PDP to enable him consolidate on the achievements recorded in his first term and put an end to godfatherism in the state.
Present at the rally were former Vice Presidential candidate of the Peoples Democratic Party (PDP) in the 2019 general elections, Mr. Peter Obi; Chairman of PDP Governors’ Forum and Sokoto State Governor, Aminu Tambuwal; Chairman, South-south Governors’ Forum and Delta State Governor, Dr. Ifeanyi Okowa; Governors Nyesom Wike, Seyi Makinde, Ben Ayade, Duoye Diri, Victor Ikpeazu, Udom Emmanuel of Rivers, Oyo, Cross-Rivers, Bayelsa, Abia, Akwa Ibom states respectively, among other dignitaries.
According to Obaseki, “I don’t have anything to say to you my Edo people but to thank you; you have been wonderful especially as we went through the 192 wards to seek your support for reelection.
“We will win this election because so far over 100 groups have endorsed me for the race. With groups like the Nigeria Labour Congress (NLC) Trade Union Congress (TUC) Nigeria Union of Teachers (NUT), Nigeria Union of Pensioners (NUP) and other groups in the state behind me, tell me how we will lose the election?”
Obaseki continued: “Democracy is not a government of godfathers but a government of the people, by the people and for the people. In Edo we have been fighting godfatherism and by Saturday we will put an end to it, and after that go Lagos and put an end to godfatherism in Nigeria.
“The godfather disturbing Nigeria came up this morning, he is afraid because he knows when we finish that of Edo, we will come for him in Lagos and finally end godfatherism in Nigeria”.
On his part, Tambuwal urged the Independent National Electoral Commission (INEC) and security agencies to ensure the conduct of a free, fair and credible poll in the state.
He said: “I learnt they are coming to Edo with a bullion van; don’t sell your votes; vote and protect your votes.
“I am appealing to the Independent National Electoral Commission (INEC) to conduct a free, fair and credible election. I also want to appeal to all the security agencies not to intimidate anybody on election day. Even when you are being intimidated, don’t run home, stay back and protect your votes.
Meanwhile Okowa noted: “This is the first time a governor went round from ward-to-ward to campaign. As you vote, remain vigilant and shine your eyes. No one can cheat the majority. Edo will not be left out; all South-south states are PDP, so we don’t want anybody to cheat on us.”
Also, Governor Wike said:”If we must fight and put an end to godfatherism in Nigeria, it must start on Saturday in Edo State. The IGP has assured us of a secure election in Edo and the INEC chairman has also assured Edo people of a free, fair and credible election but don’t let us go and sleep with all these promises but stay awake and be vigilant and ensure that Obaseki wins.
“Obaseki must be voted for, to bring an end to godfatherism in Nigeria. The Edo election is important as it will show the way out to eliminate godfatherism in Nigeria.”