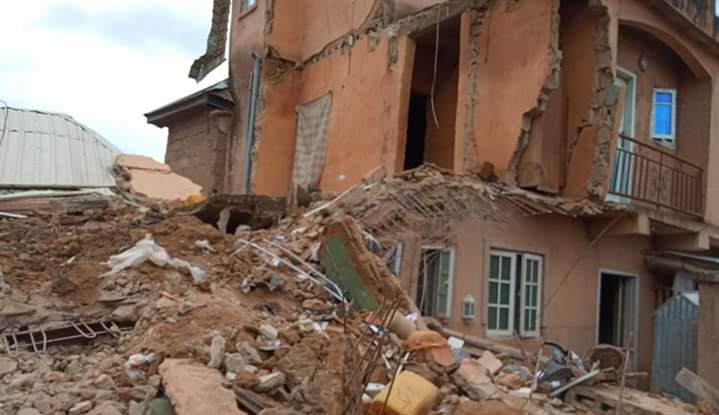 Perhaps for divine intervention, no fewer than 32 persons would have been killed when a storey building collapsed at the Yanshanu suburb of Jos, Plateau state.

The building which caved in after a downpour on Friday is said to be housing about eight households.

A resident, Adamu Mubiro, said the occupants were lucky as the building came down minutes after they were evacuated.

“When the rain started, we heard some sound from the building with four flats and some people came to warn the occupants to vacate the place.

“Less than ten minutes after they moved out of the building, it collapsed around 9am.”

The General Manager of the Jos Metropolitan Development Board, Kefas Yirlwang, who also confirmed the building collapse, however, said that no life was lost.

Yirlwang said, “It was an old building that collapsed during heavy rain.  Immediately, we heard of the incident, our men were immediately deployed in the area and fortunately, there was no loss of life as the occupants were safely taken away. ”

The General Manager warned residents to steer clear of dilapidated structures to avoid any untoward incident, especially during the rains.

All rights reserved. This post: 'Dozens escape death as building collapses in Jos' and other digital content on this website, may not be reproduced, published, broadcast, rewritten or redistributed in whole or in part without prior express written permission from Anambra City News.