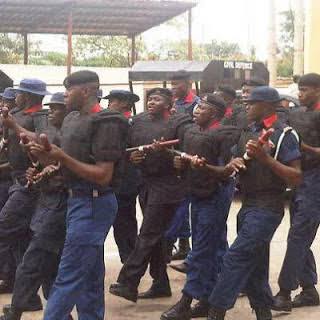 No fewer than three alleged cattle rustlers have been arrested by the Agro-Ranger Squad of the Nigeria Security and Civil Defence Corps (NSCDC) in Oyo State.

The operatives also recovered 18 cows at Kara market in Ogbomosho.

The Oyo State Commandant of the Nigeria Security and Civil Defence Corps, Iskilu Akinsanya, said this while parading the suspects at the state command headquarters, Agodi Ibadan.

He gave out the identities of the arrested suspects as Kabiru Galadi, 47, Jamiu Muhammadu, 47, Babuga Muhammodu, 22, and one Japi Muhammodu, who is currently at large.

According to him, Babugu Muhammad, who was residing at Ogbomoso invited Jamiu Muhammad and Kabiru Galadi from Zamfara State for the operation before they were arrested at Kara Market while trying to sell the stolen cows.

The three suspects were handed over to the Nigerian Army, who have been on their trail from Zamfara State for similar offences.

Commandant Akinsanya appreciated law-abiding Fulani herdsmen in the state, vigilante, farmers’ association, and other residents for their support in giving vital information to NSCDC, which enabled the Agro Rangers to arrest the suspects.

All rights reserved. This post: 'Civil Defence nab three suspected cattle rustlers in Oyo' and other digital content on this website, may not be reproduced, published, broadcast, rewritten or redistributed in whole or in part without prior express written permission from Anambra City News.

For the records: Buhari’s Independence Anniversary broadcast to Nigerians