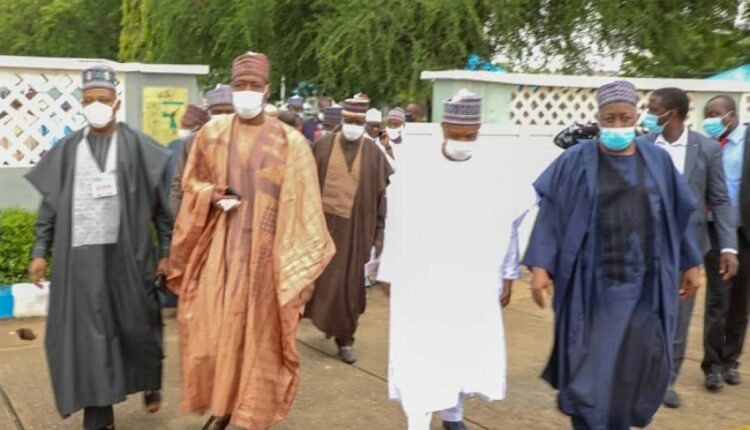 Miffed by the last week’s attack of the convoy of Governor Babagana Zulum of Borno state by insurgents, Governors elected on the platform of the All Progressives Congress (APC) on Sunday pledged their readiness to mobilize resources towards reviewing the security architecture of the six north east states.

The governors who operate under the aegis of Progressives Governors’ Forum (PGF) lamented the increasing state of insecurity in the zone, in a veiled reference to the assertion of the Shehu of Borno, Alhaji Abubakar Ibn Umar Garbai Elkanemi that Borno was no longer safe. 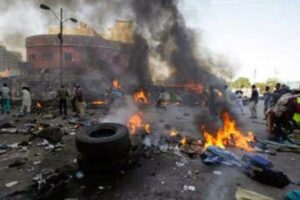 Bagudu, who was accompanied by Gov. Mohammed Badaru of Jigawa, said the forum would mobilise the needed funds to support the security in Borno. Bagudu said that the PGF team was in Borno to identify with and encourage the government and people of the state.

“This challenge facing the state is for all Nigerians and it’s not just only for Borno people. “We will continue to urge the security agencies to do more.

“We will continue to mobilised more funding to support both the security agency and the resettlement programme of displaced people so that they can go back to their normal lives,’’ Bagudu said. 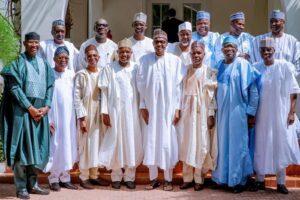 Also speaking, Badaru lauded President Muhammadu Buhari for the gains recorded in the counter-insurgency campaign. He called for more funding and enhanced security arrangement to restore lasting peace in the state and north-east in general.

Responding, Gov. Zulum who lauded the forum for its support, raised concern over possible sabotage in the system that would not allow the insurgency to end.

“Let me re-echo my previous position with respect to the level of insurgency in Borno. I earlier said that the gravity of the insurgency cannot be compared with what has happened between 2011 -2015 on one hand and 2015 till date on the other.

“Yes, the president has done well, but there is sabotage in the system that will not allow the insurgency to end,’’ he said, while asking for more concrete measures by the military to end the insurgency, adding that displaced persons needed to go back home and pick up their normal lives.

The governor lauded President Buhari for creating the North East Development Commission, which he said had created job opportunities and is assisting in the reconstruction of affected communities in the state.