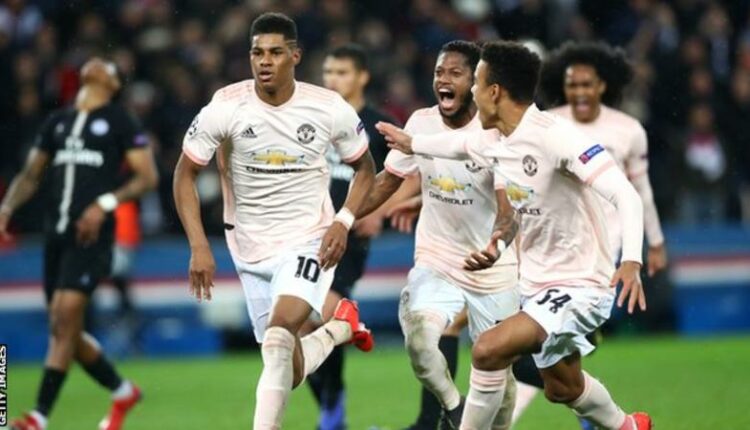 Premier League champions Liverpool will have to negotiate a group containing Ajax, Atalanta and Danish side Midtjylland.

Manchester City are in Group D with Porto, Olympiakos and Marseille.

Meanwhile, Cristiano Ronaldo and Lionel Messi are set to face each other after Juventus and Barcelona were drawn in Group G, while holders Bayern Munich will face Atletico Madrid in Group A.

The draw, which also saw Real Madrid and Inter Milan paired in Group A, took took place without club officials present because of the ongoing coronavirus pandemic.

And it was a particularly tough draw for Manchester United, who will play last term’s finalists Paris St-Germain, as well as 2020 semi-finalists RB Leipzig.

This year’s group stage begins on Tuesday, 20 October while the final is on Saturday, 29 May 2021 at the Ataturk Stadium in Istanbul.

Following Thursday’s draw it was announced that fans could make a partial return to Uefa matches for the first time since March – where local laws permit.

Starting during the October international break, fans will be capped at 30% of a stadium’s capacity but away supporters will not be able to attend.

Social distancing will be mandatory and additional precautionary measures such as mask wearing must be implemented in accordance with local rules.

Uefa’s decision comes after over 15,000 supporters attended a pilot in the Super Cup between Bayern Munich and Sevilla in Budapest on 24 September.

In a statement Uefa president Aleksander Ceferin, described the decision as “a sensible first step which puts fans’ health first and respects the laws in each country”.

It has been one of the greatest rivalries in world football for the past decade – and now Lionel Messi and Cristiano Ronaldo will go head-to-head once more in the Champions League.

When Barcelona were drawn with Juventus in Group C, fans throughout the world immediately started looking forward to a meeting between the two.

They have won 11 of the last 12 Ballon d’Or awards, Messi winning a record six and Ronaldo with five.

Of their 35 competitive meetings, Messi has been victorious 16 times to Ronaldo’s 10 with the remaining nine fixtures ending in a draw.

If they were hoping for some escape from the pressure on them to get new signings when today’s Champions League draw was made, Manchester United did not get it.

Two of last season’s semi-finalists – and a long trip to Turkey – is not what they would have wanted from their Pot Two seeding. It means Ole Gunnar Solskjaer’s men will be outsiders even to make it through.

If there is one straw to clutch at, it is the memory of their 3-1 win over PSG at the Parc de Princes two seasons ago which overturned a 2-0 defeat from the home leg, which was one of the greatest nights in their illustrious European history.

England’s three other group-stage entrants will be reasonably satisfied.

Chelsea have been drawn with Europa League winners Sevilla, who accounted for United and Wolves on their run to the final in Cologne, where they beat Inter Milan, but Frank Lampard will fancy his side to get out of a group that contains French side Rennes and Russian newcomers Krasnodar.

So disappointed to exit at the quarter-final stage in August thanks to their shock defeat by Lyon, Manchester City drew possibly the easiest top seed, Porto, plus Olympiakos and Marseille, two sides they have never met before.

Liverpool, winners in 2019 and beaten finalists the year before, face another club with a magnificent European history, Ajax, who they have remarkably only played in one other tie, back in 1966, when the Dutch side came out on top over two legs.

They have never played their other two opponents, Atalanta and Midtjylland, before but it would be a major surprise if Jurgen Klopp’s team did not reach the last 16.

All rights reserved. This post: 'UCL: Manchester United to face PSG, RB Leipzig, Instanbul Basaksehir' and other digital content on this website, may not be reproduced, published, broadcast, rewritten or redistributed in whole or in part without prior express written permission from Anambra City News.

Independence: Nigeria is presently in coma and on life-support says Fayose