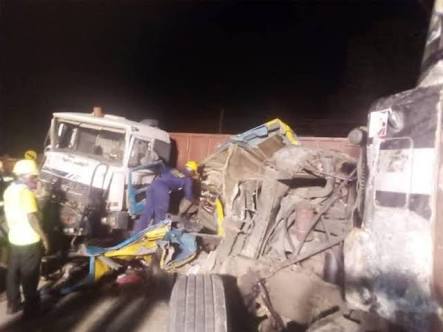 The Lagos State Emergency Management Agency, which disclosed this on Sunday, said its men rescued a critically injured driver and several passengers at Oke Afa, inward Ejigbo, where one of the crashes occurred.

‎LASEMA’s spokesperson, Nosa Okunbor, said in a statement, “The timely intervention at Oke Afa saved the lives of the trapped and seriously injured driver identified as Olasupo Adedeji resident of 1, Asenuga Street, Ile Iwe bus stop, Ikotun and those of his passengers as well.

“The quick rescue operation was conducted when LRT discovered that driver of a mini-bus had rammed his commercial vehicle into a parked trailer on top speed which left him trapped, with many passengers injured.”

Okunbor also said two persons were injured in another accident at Okokomaiko, inward Iyana Isashi before midnight of Friday.

“All the injured passengers with varying degrees of injuries has since been treated, while the trapped driver after extrication, was administered First Aid treatment, and was quickly taken to the Trauma Centre for further medical attention by LRU Paramedics who were responders with the LRT at the Incident scene,” he added.

However, he further disclosed that a driver and passenger died in an accident at Okoko inward Iyana Isashi along Badagry Expressway.

“A trailer with registration number AAA 95 XX carrying several rolls of iron while on one way, broke down at the middle of the road making it difficult for other road users along the axis to move freely.

“Some passengers on the mini-busses were rescued alive with several degrees of injuries and were taken to the nearest hospital.

“Unfortunately, a driver and one passenger in the min-bus with registration number SMK 343 YA were trapped in the bus.

“Remains of the victims were bagged and handed over to Lagos State Environmental Health Monitoring Unit Officials,” the LASEMA spokesman said. ‎

All rights reserved. This post: 'Two die, several injured in Saturday night accidents in Lagos' and other digital content on this website, may not be reproduced, published, broadcast, rewritten or redistributed in whole or in part without prior express written permission from Anambra City News.