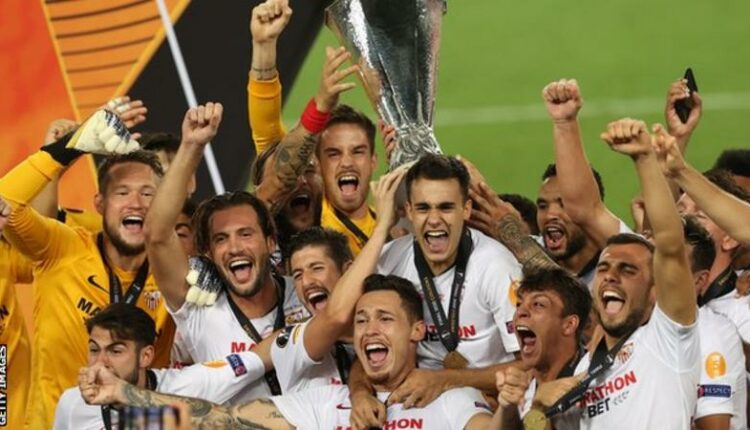 Sevilla’s dominance in Europa League continued on Friday as they won the tournament for a record sixth time thanks to victory over Inter Milan in a thrilling final in Cologne.

The drama started when Sevilla defender Diego Carlos fouled Romelu Lukaku for an Inter penalty – and ended when Lukaku deflected Carlos’ bicycle kick into his own net.

It means Inter Milan’s wait for a trophy will tick over into a 10th year at least.

Lukaku gave the Italian side an early lead from the penalty spot for his 34th goal of the season, extending his record of scoring in consecutive Europa League games to 11.

Luuk de Jong scored two headers – from Jesus Navas and Ever Banega crosses – to put Sevilla into the lead.

Inter were level when Diego Godin nodded in to make it 2-2 in the 35th minute.

The game could not continue at that high tempo, but with extra-time on the cards, there was a twist to come.

Carlos flew into the air to meet a high ball with an overhead kick which was probably going wide until Lukaku stuck out a leg and diverted it past his own goalkeeper.

It was a first trophy in the managerial career of Sevilla boss Julen Lopetegui, whose side are unbeaten since February, a run of 21 games.

The last nine Europa Leagues all have been won by Spanish or English teams – Sevilla have won four, Chelsea two and Atletico Madrid and Manchester United one each. The last Italian team to win were Parma in 1999.

But this was a new Sevilla team – with barely anybody left since their three wins in a row from 2014 to 2016.

Former Spain and Real Madrid boss Lopetegui took over last summer and built a new-look team. Nine of the starting XI in Cologne were in their first season at the club.

They were cheered on by two fans, with Sevilla giving two of their 25 tickets for officials to supporters with membership numbers 2108 and 2020 (to make the date of this game).

Carlos looked as if he was going to the villain of the run as he lost Lukaku and then fouled the Belgian striker on the corner of the box after five minutes.

That was the third Europa League game in a row that he conceded a spot-kick, doing the same in wins over Wolves and Manchester United in the previous two rounds. 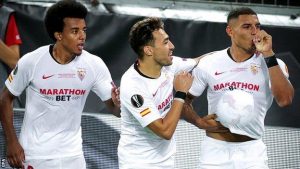 But their unlikely hero was De Jong, a man who had scored only eight goals since joining last summer – and had a goalless spell with Newcastle in 2014.

His first header was a diving one from a Navas cross and his second was a wonderful looping effort into the top corner from Banega’s free-kick.

Carlos’ redemption was complete when he tried an audacious effort with help from Lukaku.

Former Chelsea boss Antonio Conte – who has brought in five Premier League players since taking over last summer – led Inter Milan to second place in Serie A this season.

That was their best finish since 2010-11, which was also the last time they won a trophy – the Coppa Italia.

Left wing-back Ashley Young became the first Englishman to start a European final for a non-British club since Owen Hargreaves in the 2001 Champions League final for Bayern Munich.

And it was his former United team-mate Lukaku who had a quick impact when he was fouled for a penalty which he fired home excellently.

The plaudits rolled in at that moment. He is the first player to score 34 goals in his first season with Inter since Ronaldo in 1997-98 and his nine European goals is a joint record for an Inter player in a season.

But he was not the story of the game – in the way he would have wanted anyway – as Sevilla came back.

But Lukaku missed a one-on-one and substitute Alexis Sanchez had a shot cleared off the line, either side of Carlos’ winner.

Conte’s future is in doubt after disagreements with the club’s owners. A trophy would have helped.

All rights reserved. This post: 'Sevilla beat Inter to claim sixth Europa League trophy' and other digital content on this website, may not be reproduced, published, broadcast, rewritten or redistributed in whole or in part without prior express written permission from Anambra City News.