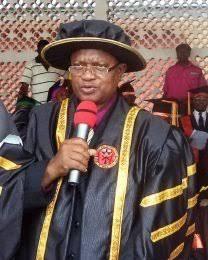 The Edo State Governor, Mr. Godwin Obaseki, has mourned the death of the Rector of Auchi Polytechnic, Dr. Momodu Sanusi Jimah, who died at the age of 60 years.

The governor, in a statement, said Dr. Jimah was an astute administrator who contributed to the growth of Auchi Polytechnic, ensuring stability and development of the institution. According to him, “It was with a heavy heart that I received news of the passing of the Rector of Auchi Polytechnic, Dr. Momodu Sanusi Jimah. I condole with the management, staff and students of the institution over the death of Dr. Jimah.

“As an administrator, late Dr. Jimah brought his expertise to bear in the transformation of the institution, providing leadership to steer the institution aright upon his appointment as Rector.”

The governor commiserated with the family of the deceased, praying that God will grant them the fortitude to bear the loss.

Jimah passed away on Friday.
According to Aledeh news,the deceased had been sick for some weeks.
His death came a day after the management of the polytechnic debunked social media rumours that he had passed away.
Jimah was married and blessed with children.
Until his appointment as the substantive Rector, he was in acting capacity as Rector of Auchi Polytechnic.
He was a Chief Lecturer in the Department of Urban & Regional Planning.
He was an Alumnus of the Polytechnic where he obtained the Higher National Diploma in Urban & Regional Planning in 1982, a Post Graduate Diploma in Urban & Regional Planning in 1997 and a Masters in Business Administration in 2003.
In 2007, he obtained his Masters Degree in Geo & Regional Planning of the Ambrose Alli University, Ekpoma. In 2011, Jimah bagged his Doctorate Degree in Geo & Regional Planning with specialization in Environmental Resource Management.
He joined the services of Auchi Polytechnic in 1991 where he had demonstrated consummate skills in teaching, research and administration rising to the rank of Chief Lecturer in 2009.
Dr.Jimah was a member of several Professional bodies among which are: Membership of the Nigeria Institute of Town Planners, Fellow of the Institute of Chartered Economists of Nigeria, Member, Environmental Management Association of Nigeria, and Member, Nigeria Environmental Society and Fellow Institute of Entrepreneurship of Nigeria.
He had held many positions of high responsibility in the Polytechnic. He was at various times Acting Head, Department of Urban & Regional Planning; on relief duties; Dean, School of Environmental Studies; Director, Centre for Entrepreneurial Development; Director, Auchi Polytechnic Consultancy Services and Assistant Dean, School of Evening Studies.
Dr. Jimah had to his credit more than forty-one scholarly publications in reputable National and International Journals, published and evaluated books as well as papers presented at conferences.