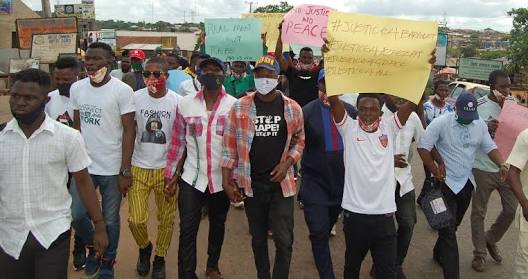 The National Association of Nigerian Students, (NANS), on Thursday threatened to stage a nationwide protest on Monday, September 14, if the Federal Government does not reverse the recent hike in fuel price and electricity tariff. ‎

Addressing journalists in Abuja, NANS President, Comrade Danielson Akpan, said the Federal Government should prioritize the welfare of Nigerians as is being done by governments in other parts of the world.

He said, “Precisely on Monday 14th September 2020, Nigerian students shall be making a loud statement in a mass protest across the six geo-political zones, and the Federal Capital Territory, FCT, to demand an outright reversal of the insensitive price hikes.

“It is no longer news that the federal government in a swooping total deregulation and subsidy removal policy announced another increase in the pump price of PMS.

“It is also a known fact that prior to that, the federal government also approved increases in electricity tariff while banks regrettably reduced interests on customer savings.

“The effects of these increases amidst earlier increments made in Value Added Tax, VAT, and multiple taxations on goods and services have started causing unbearable consequences, thereby compounding the obvious imbalances in the economic and social life of Nigerians, most of whom are dependent on (unstable) electricity supply and PMS to do businesses and make ends meet.

“There have been uncharted abuse of our foreign exchange by beneficiaries of subsidies over the years and by no means new to this administration, which has had nothing to do with the welfare of the masses, is a misplacement, as these huge resources deployed to a few, could also be deployed for the optimum growth of the nation.

“The new normal in the world requires the channeling of resources to profitable ventures with humane face, conscious and deliberate growth plans, discoveries and discussions on sustainability models of revenue generation, firm economic programs with deep impact on citizens and how to prevent the country from another recession, rather than continue an unsustainable squander of the nation’s resources in the name of subsidy.

“This is totally unacceptable going forward, however, the period of the increase due to such removal leaves all in wonder.”

Stressing that the Federal Government was subjecting the citizens to hardship, the NANS leader added, ‎“Nigerians are bewildered that has been under months of lockdown and restrictive measures, welcoming them back to normal life with increases in prices of essential commodities is a burden too harsh for the citizens to bear.”‎