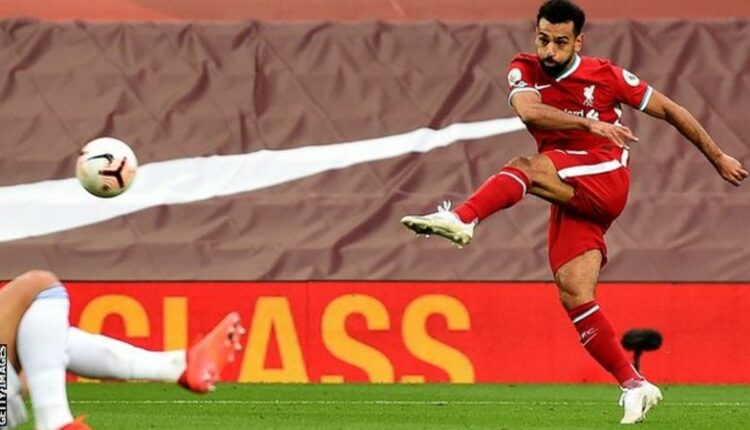 Leeds United made a dramatic return to the Premier League after a 16-year absence as they produced a magnificent display only to lose to a late penalty in a thriller against champions Liverpool at Anfield.

Liverpool, back in action after winning their first title in 30 years, led three times but were pegged back on each occasion by Marcelo Bielsa’s fearless side before this superb match was settled by hat-trick hero Mohamed Salah’s spot-kick.

Leeds looked to be leaving Anfield with a fully deserved point only for new £30m striker Rodrigo, on as a substitute, to produce a shocking challenge on Fabinho in the 88th minute, leaving Salah to give Liverpool victory after a serious scare.

Salah made it a nightmare start for last season’s Championship winners when he drilled home a penalty in the fourth minute after his shot was handled by another Leeds new boy, Germany defender Robin Koch.

Leeds produced the perfect response as Jack Harrison drilled a low right-foot shot past Alisson only for poor defending to allow Virgil van Dijk to restore Liverpool’s advantage as he headed in Andy Robertson’s corner.

Van Dijk was badly at fault when he gifted Patrick Bamford Leeds’ second before a searing strike from Salah completed the scoring in a chaotic first half.

In a game which also contained four disallowed goals, Leeds were not to be brushed aside and were level again after 66 minutes when a perfect first touch and volley from Mateusz Klich flashed past Alisson.

Man of the match Salah had the final word, however, after that reckless late challenge from Rodrigo.

Leeds so unlucky to lose

The presence of manager Bielsa alone will add to the theatre of the Premier League and his vibrant, attacking Leeds United side already promise to decorate the top flight.

Leeds could have feared the worst when Liverpool capped a rampant opening spell by scoring from the spot even before the visitors had secured possession in the opposition half.

Leeds got on the ball, were bursting with energy and attacked Liverpool every time they had the chance, playing with confidence and self-belief.

Three times they went behind but not for one moment did their heads drop or was their positive intent diminished, as proved by the manner in which they fought their way back into the game.

The final injury was cruel but self-inflicted, Rodrigo’s ludicrous challenge on Fabinho drawing the inevitable penalty that cost Leeds a point.

There was so much to admire about Leeds in an attacking sense but there is also an air of naivety which they must address otherwise plenty of teams will fancy scoring goals against them.

Leeds conceded two penalties and from two set-pieces, although Salah scored a quite brilliant volley when they failed to clear a free-kick.

Bielsa and Leeds have created a hugely positive impression from what was arguably the toughest test of all, away to the champions on the opening day.

In the end, however, they had only Rodrigo to blame for giving Liverpool the chance to gratefully snatch victory.

All rights reserved. This post: 'Mohamed Salah’s hat-trick sees Liverpool dismantle hard-fighting Leeds' and other digital content on this website, may not be reproduced, published, broadcast, rewritten or redistributed in whole or in part without prior express written permission from Anambra City News.

Flood displaces over 2,000 people, washes away farmlands in Kwara