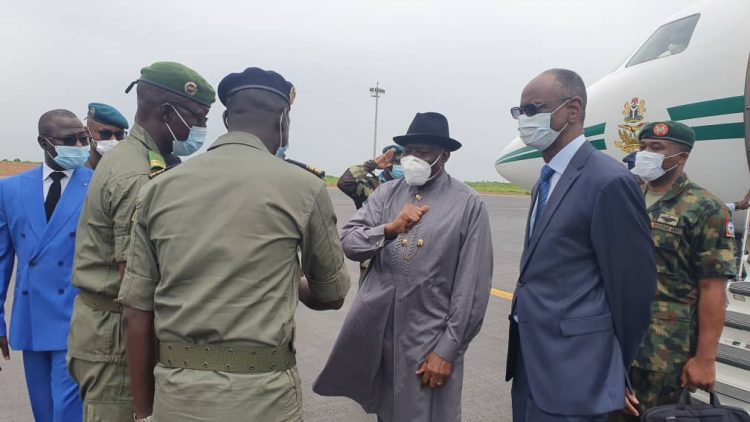 They are in the troubled nation to resolve the impasse and possibly return the west African nation to civilian rule.

Some soldiers had arrested Keita and other leaders after a mutiny on Tuesday, dealing another deep blow to a country already struggling with a brutal Islamist insurgency and widespread public discontent over its government.

Mali’s neighbours have called for Keita to be reinstated, saying the purpose of the delegation’s visit was to help “ensure the immediate return of constitutional order”.

A delegation official said they would meet members of the junta and later Keita, who is being held with prime minister Boubou Cisse in Kati, a military base northwest of Bamako where the coup was unleashed.

Adding to the international pressure, the United States on Friday suspended military aid to Mali, with no further training or support of the Mali armed forces.

But thousands of jubilant Malians took to the streets of Bamako on Friday to celebrate the toppling of Keita, who was reelected in 2018 but became the focus of widespread discontent.

The crowds gathered in Bamako’s central square draped in the national flag and blasting on vuvuzela horns.

The rally, originally organised as an anti-Keita protest by a loose coalition that has led months of mass rallies against him, was recast to “celebrate the victory of the Malian people”.

Speaking at the rally Ismael Wague, spokesman for the junta which calls itself the National Committee for the Salvation of the People, paid tribute to the public.

“We merely completed the work that you began and we recognise ourselves in your fight,” he said.

The junta has said it welcomes the ECOWAS visit but has not talked of restoring Keita to power.

“A transitional council, with a transitional president who is going to be either military or civilian” would be appointed, Wague told France 24 television Thursday.

Keita won election in a landslide in 2013, presenting himself as a unifying figure in a fractured country, and was re-elected in 2018 for another five-year term.

But he failed to make headway against the jihadist revolt that has left swathes of the country in the hands of armed Islamists and ignited ethnic violence in the country’s volatile centre.

Thousands of UN and French troops, along with soldiers from five Sahel countries, have been deployed to try to stem the bloodshed.

In a sign of the continuing challenge facing the country, four soldiers were killed by an explosive device in the centry of the country.

The ECOWAS visit to Mali comes after the UN’s peacekeeping mission in the country said a human rights team had gained access to the ousted president and other detainees on Thursday.

While Keita and Cisse have no television, radio or phone, other detainees are in a training centre, where they are sleeping on mattresses and have a TV, according to witnesses to the visit.

The 75-year-old ousted president “looked tired but relaxed,” they said, describing his conditions as “acceptable”.

Tuesday’s coup was the second in eight years, and has heightened concern over regional stability as its jihadist insurgency that now threatens neighbouring Niger and Burkina Faso.

All rights reserved. This post: 'Jonathan, ECOWAS leaders in Mali, to meet with Keita, Coup leaders' and other digital content on this website, may not be reproduced, published, broadcast, rewritten or redistributed in whole or in part without prior express written permission from Anambra City News.