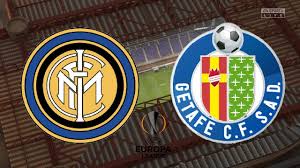 Inter Milan on Wednesday beat Getafe 2-0 to clinch places in the quarter-finals of the Europa League.

Antonio Conte’s Inter Milan will face either Steven Gerrard’s Rangers or Bayer Leverkusen with the Germans holding a 3-1 lead going into Thursday’s match.

Inter’s meeting with the La Liga side was played over just one leg in Gelsenkirchen to save time ahead of next week’s last eight to be held in Germany.

They advanced to the next round as Romelu Lukaku became the club’s first player to score in five straight European appearances since Brazilian striker Adriano in 2004.

Godin had handballed in his own box but veteran cente-forward Jorge Molina missed the resulting penalty.

Christian Eriksen made sure of Inter’s spot after 84 minutes with his first touch after Dakonam Djene made a mess of a clearance inside his own area.