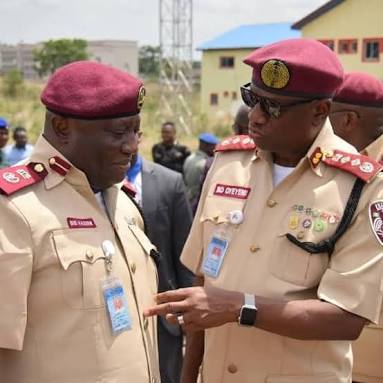 The Federal Road Safety Corps (FRSC), said it had deployed no fewer than 1,500 of its personnel to provide security for Saturday’s Edo governorship election.
FRSC Corps Marshal, Dr Boboye Oyeyemi, disclosed this in a statement by the Corps Public Education Officer (CPEO), ACM Bisi Kazeem on Tuesday in Abuja.
Oyeyemi said the deployment of the personnel became neccessary because of the heightened concern of political violence during the Saturday’s election.
He said the officers and men of the FRSC would assist in ensuring a hitch-free electoral process in Edo.
He said that the FRSC team would be led by the Zonal Commanding Officer RS5, Benin, to be assisted by the Assistant Corps Marshal in charge of Federal Operations at its FRSC headquarters, including Sector Commander RS5.1 Benin.
He added that the commission had approved the deployment of about 35 operational vehicles, including tow trucks and ambulances to aid the electoral processes in the 18 Local Government Areas of the State.
He said that the deployed personnel were to engage in carrying out enforcement of no movement order.
“Certification of INEC vehicles to be used to convey electoral materials, removal of obstructions and rescue operations as well as joining other sister agencies to maintain orderliness at assigned polling booths, ” he said.
The Corps Marshal advised the FRSC personnel to conduct themselves professionally in the conduct of their duties diligently and ensure compliance with the Presidential Task Force Directives on COVID-19.
According to him, FRSC 122 Emergency toll free line remains open to the general public to reach out in case of any unforeseen circumstances that may arise.

All rights reserved. This post: 'FRSC deploys 1,500 personnel, 35 vehicles for Edo poll' and other digital content on this website, may not be reproduced, published, broadcast, rewritten or redistributed in whole or in part without prior express written permission from Anambra City News.

COVID-19: Senate faults policy on testing by private labs only

FCT Minister urges journalists to be unifying force for Nigeria