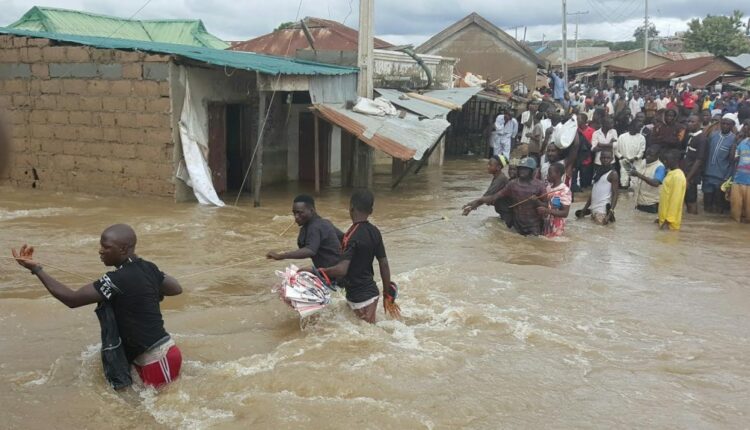 Serious flooding as a result of heavy downpour wreaked havoc across several parts of the Federal Capital Territory on Saturday.

In the process, many houses and roads were submerged; the most tragic being reports that five members of a family were swept away by the rampaging flood at Giri Quarters, Abuja.

The Abuja-Lokoja highway was also rendered unpassable as travelers waited endlessly for the flood to subside, while some had to postpone their trips till the next day. The traffic girdlock caused by the flood was better imagined.

The downpour which lasted for several hours grounded commercial activities in the nation’s capital.

The Director-General, FCT Emergency Management Agency, Abbas Idriss who confirmed the incident said a body had been recovered while the search for the others was ongoing.

“There was a family of five at Giri Quarters that were swept away by a flood and we have recovered the body of a family member; we are still searching for the remaining four. There was no flood at Lokogoma, though it rained heavily. We are opening channels and drainage in Lokogoma, so the water has free access now.”

He further disclosed that other parts of the FCT, including Kuje and Gwagwalada, also recorded flooding during an overnight downpour.

He, however, said he was not aware of any casualty in the Gwagwalada incident.

“I’m aware there was a flood in many places in FCT, including Gwagwalada, Giri Quarters, part of Kuje and a building collapse there. I’m only aware of the casualty in Giri, I don’t have any information on an alleged casualty in Gwagwalada.”

An eyewitness, Mabel Onyibor who was reportedly travelling to Lokoja from the FCT, had to abandon her trip when it became obvious that the flood was not subsiding.

“You needed to see the road, the traffic was unimaginable; we were on that traffic for over two hours and at a point, I decided to discontinue with the journey, it was really a terrible situation,” she narrated.