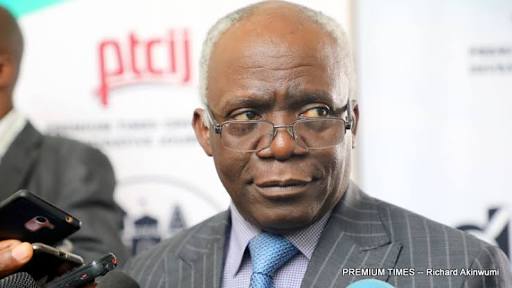 A coalition of labour and civil society groups led by a Senior Advocate of Nigeria, Femi Falana on Sunday cautioned President, Muhammadu Buhari against deploying soldiers to disperse the #EndSARS protesters from the streets.

Operating under the aegis of the Alliance for Survival of COVID-19 and Beyond, (ASCAB) the groups also vowed to drag the Chief of Army Staff, Lt Gen Tukur Buratai, to the International Criminal Court, in The Hague if any of the #EndSARs protesters were killed by any soldiers.

In a statement issued in Abuja on behalf of the group on Sunday, titled, ‘#EndSARS: Kill protesters, face International Criminal Court, ASCAB cautions Buratai’, Falana asked the Federal Government to withdraw plans to use soldiers to quell the protests that have rocked major cities across Nigeria.
The protests against police brutality which began over a week ago in Lagos and Abuja have spread to about 30 states in the country.

The statement which was sequel to statement by the the Nigerian Army that it would commence Exercise Crocodile Smile VI from October 20 to December 31, as part of its effort to enhance the safety and security of the country.

But Falana, who is the Chairman of ASCAB, warned, “Buhari should not invite soldiers to resolve a purely democratic issue that calls for dialogue and constructive engagement.”
ASCAB noted that protests have common features across the world as seen in Hong Kong, United States, France, South Africa, Belarus and even in Sudan.
It added that in no instance were soldiers deployed to suppress the protesters.

“Nigeria wants to set another ugly precedence in world history,” the group said.

It reminded the Federal Government that Operation Crocodile Smile had been declared illegal by a Nigerian Court with competent jurisdiction following legal actions filed by Falana.

It added that efforts by the Chief of Army Staff to challenge the order by approaching the Court of Appeal met a brick wall.

ASCAB recalled that the Federal High Court in July this year, granted a perpetual injunction restraining the Army from such an exercise, in Femi Falana SAN v Chief of Army Staff (FHV/L/CS/1939/19

The group said it was already monitoring and compiling lists of all extra-judicial killings associated with the protests and that Buratai or any soldier involved in any killings would be held personally responsible at the international court.
ASCAB said peaceful protests remained the only way Nigerians are entitled under the Nigerian constitution to register their grievances against a system that suffocates them.
The statement further read, “The plan to deploy soldiers is dangerous.

“It will push Nigeria into the red light district of global reckoning.
“Sending soldiers after school children and leaders of tomorrow shows what future we anticipate for the teeming population of young men and women who have taken to the streets to protest against a system that buries their dreams and shatter their potentials and aspirations.
“Nigerian authorities said on Saturday that soldiers will be deployed this week to bring an end to the weeklong demonstration over police brutality.

“We urge President Mohammadu Buhari not to use soldiers to quell a peaceful, civil protest.
“The protesters have been lawful. The few cases of violence were associated with armed thugs disrupting the protests coupled with the shooting of protesters by security operatives.”

All rights reserved. This post: '#EndSARS: Falana’s ASCAB cautions Buhari against deploying soldiers to disperse protesters' and other digital content on this website, may not be reproduced, published, broadcast, rewritten or redistributed in whole or in part without prior express written permission from Anambra City News.