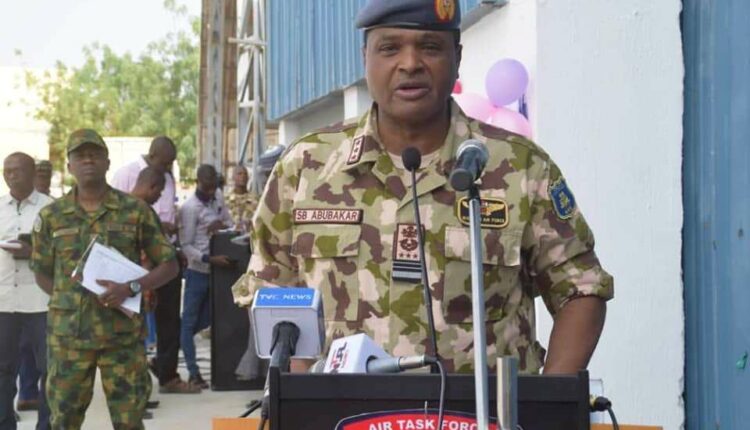 The Chief of Air Staff (CAS), Air Marshal Sadique Abubakar, has inaugurated 11 reactivated Aerospace ground equipment at the Tactical Air Command, Nigeria Air Force, Makurdi.
Abubakar, at the ceremony on Wednesday, disclosed that the equipment would be deployed to the North-East and other conflict areas in the country to support the conduct of air operations.
He said that the 131 engineering group of the air force had demonstrated that what most people discarded as beyond repairs could be brought to serviceable use.
He said the reactivation of equipment was part of NAF’s preparation ahead of the arrival of the new additional air platforms ordered by the Federal Government and expected in the country by the first quarter of 2021.
He commended the Commander and all the officers for putting in their best to bring back the equipment to serviceable status.
“I am particularly excited that some of these equipment will even be deployed to the North-East and other conflict areas to support air operations.
“Ordinarily, we would have gone looking for money to buy them. I am very impressed with the innovation and commitment on the part of officers and men of the engineering group for this feat.
“From all indications, we are thinking way ahead. We are expecting this additional air platforms in the first quarter of next year,” he said
The CAS later inaugurated the reactivated overhauled bulk fuel installation centre at the base.
Earlier in his address, the Air Commanding Officer, Tactical Air Command, Makurdi, Air Vice Marshal Olusegun Philips, had said that the equipment were reactivated by personnel within their unit resources with some assistance from the command headquarters.
“The equipment reactivated by the unit include a 6x jaguar GPUS one of which has already been deployed to 231 HOD Bauchi.
“Also reactivated is one GPU for 115 SOG and another Eagle towing vehicle for headquarters ATF, Maiduguri.
“We also have one jaguar hydraulic cart, a 15-ton Henley forklift and a 3.6 ton UNIMOG crane. Those activated by 101 ADG include runway sweeper and fire tender,” he said
He commended the CAS for the trust reposed in NAF personnel, and pledged to ensure that the command continued to do more for the nation.
The News Agency of Nigeria (NAN) reports that the CAS later inspected ongoing projects and the state of the Makurdi base. (NAN)