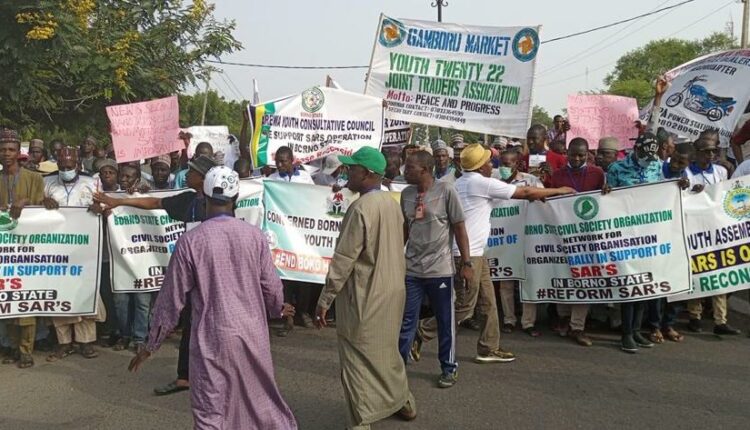 Hundreds of pro-SARS protesters on Tuesday took to the streets of Maiduguri, the Borno State capital demanding the reinstatement of the recently dissolved Special Anti-Robbery Squad.

The Inspector General of Police, Mohammed Adamu had on Sunday announced the disbandment of the police unit after a protest demanding of it’s scrapping sparked up across the country.

But in a twist to the SARS’s tale, members of Civil Society Organisations and trade unions in Borno State on Tuesday staged street rally to express their displeasure over the disbandment of the SARS by the federal government.

The protesters, who also include leaders of various students body in Borno state, said they want SARS to continue operating in the State.

The chairman of the coalition of CSOs in Borno, Amb. Ahmed Shehu, who spoke on behalf of other protesters, noted that even though they are not happy with happenings in other parts of the country, SARS operatives have contributed immensely to the fight against terrorism in the Northeast.

The protesters who carried placards and banners with inscriptions such as ” We want SARS in Borno ” Give us SARS Back to end insurgency “, matched through Bolori roundabout to the Government House roundabout .

In a letter presented to Borno State Governor, Prof. Babagana Zulum, which contained their demands, Amb . Ahmed Shehu, Chairman of CSOs in Borno who led the rally, said the CSOs and Borno citizens were shocked by the sudden disbandment of the Federal Special Anti-Robbery Squad of the Nigerian Police popularly known as (FSARS).

Shehu while noting that the disbandment as a result of public outcry is understandable, said the positive role played by SARS in Borno state in particular and the Northeast in curtailing insurgency and protecting the life and property of the citizenry is commendable and need to be appreciated.

He said SARS in this part of the country were majorly engaged in life saving operations and actively participating in supporting the military in counter insurgency operations.

He said: “The peculiarities of Borno state and the role played by SARS need to be considered hence we are demanding for urgent establishment of special unit that will protect the citizenry in Borno state. The civil society and the concerned citizens have chosen this moment to visit you (Borno State Governor) for two reasons one to commiserate with you over the recent attack on your convoy during your visit to Baga and to present to you our letter of demand for onward delivery to the president Muhammadu Buhari on behalf of the civil society and concern citizens of Borno state.

“The civil society express deep support and appreciation to the security apparatus who are tolling day and nights to end the insurgency particularly the efforts of the military in foiling and repelling many attacks targeted at the citizens of the state. We equally sympathise with the families of those who paid the supreme price in protecting the country.

“We strongly call on the Federal Government as matter of responsibility and urgency to fast tract the speedy process of establishment and unveiling of a new outfit to replace the defunct FSARS or alternatively established another agency in the police who will be charged with the responsibility of tackling the insurgency dealing with armed bandits as they are the closest agent to the grassroots.

“Borno citizens have good experience with SARS hence we are requesting the president to deploy all the SARS formation across the country to Borno state to assist in fight against insurgency. There is no denial to the fact that successes have been recorded in the recent times, we urge the Nigerian Armed Forces to re-strategize in their approaches of countering terrorism and securing the lives and property of the citizens as enshrined in the Constitution of the Federal Republic of Nigeria..

“We believed that with deliberate and enhanced civil military relation, the military will tremendously benefit from the support of local intelligence sources within the Traditional Institutions, community leaders, vigilante groups, hunters; the Army would be taking the war to the flashpoints of the terrorist to permanently dislodge the insurgents

“The Federal government had done so much in funding the state security sector and developed several structure and architectures meant to fight the insurgent to bring the destructions under control. Equally Borno state government has also supported and invested heavily on security, but the peace we are clamouring for is not yet seen.

“Therefore, we are calling for total overhaul of the process, system and strategies; there is no harm in the seeking for external support if that is what is needed to bring lasting peace to the region. Government at various levels need to engage in the creation of public awareness on the danger posed by the insecurity in the country. Measures should be introduced to deter and dissuade the insurgents from carrying out attacks.

“Government should come up with initiatives on engaging the public on the dangers of insurgency by strengthening civil-military relationship and community policing. Also, they should introduce series of measures to enhance public confidence in the security and intelligence agencies.

“The government of Nigeria should as a matter of urgency device an inclusive means of restoring economic activities of the people of the affected areas. This will go a long in curtailing the insurgency. As can be deduced, the high level of poverty and youth restiveness are among the factors that brewed the ideology behind Boko Haram.

“We demand on the Federal Government to intensify security to enable farmers to have access to their farmlands thereby reducing their overdependence on Aid. Farming is the major economic activity and source of livelihood to majority of the populace of the state in particular and the region in general, but due to the lingering security challenges people have been denied access to their farmlands.

“We demand the strengthening of security in all routes linking the metropolis to the local government areas, towns and villages across the state and the region as a whole, this will guarantee the protection of lives and properties and enable return of socio-economic activities in the States.”

All rights reserved. This post: 'Borno CSOs rally against disbandment of SARS' and other digital content on this website, may not be reproduced, published, broadcast, rewritten or redistributed in whole or in part without prior express written permission from Anambra City News.