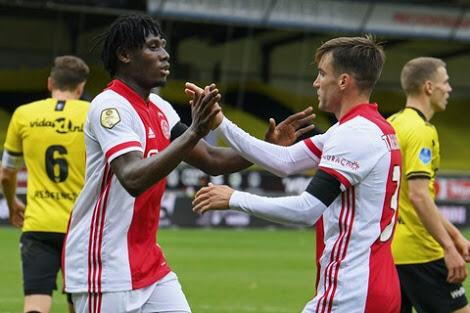 Dutch giants Ajax recorded the biggest victory in Eredivisie history on Saturday with a 13-0 thrashing at mid-table side VVV-Venlo, who had a player sent off.

Ajax, who lost 1-0 to Liverpool in the Champions League on Wednesday, surpassed their previous record – a 12-1 win over Vitesse in 1972.‎

Defender Christian Kum, 35, was sent off for VVV-Venlo in the second half with the team already trailing 4-0.‎

‎Burkina Faso international Traore, 19, scored the most goals in a Dutch top-flight match since September 2019, when Donyell Malen netted the same amount for PSV Eindhoven against Vitesse.

He also became the first Ajax player to record five goals in an Eredivisie match since Marco van Basten in 1985 (six) and the first from the club to record three assists in a league match since Frenkie de Jong in 2017.

Traore was two goals short of the Eredivisie record set by former Middlesbrough striker Afonso Alves, who scored seven for Heerenveen against Heracles in October 2007.‎

In terms of biggest winning margins, Ajax’s victory on Saturday was not only the largest in Eredivisie history, but joint-second in the club’s history in all competitions.

Ajax’s biggest win was back in 1984 when they hammered Differdange 14-0 in the Europa League (previously the Uefa Cup).

It was the first time in a decade that any team were able to score at least 10 goals in a single Eredivisie game since PSV recorded a 10-0 win over Feyenoord.

On a day to forget for VVV-Venlo, it was the biggest defeat in the club’s history, surpassing the previous record which was a 10-1 loss to FC Eindhoven in the Eerste Divisie in 1964.

In the Eredivisie, their previous heaviest defeats were by seven-goal margins to Ajax, Heracles Almelo and AZ Alkmaar.‎

All rights reserved. This post: 'Ajax hamme‎r VVV-Venlo 13-0 in record ‎win ' and other digital content on this website, may not be reproduced, published, broadcast, rewritten or redistributed in whole or in part without prior express written permission from Anambra City News.

Liverpool come from behind to beat Sheff Utd