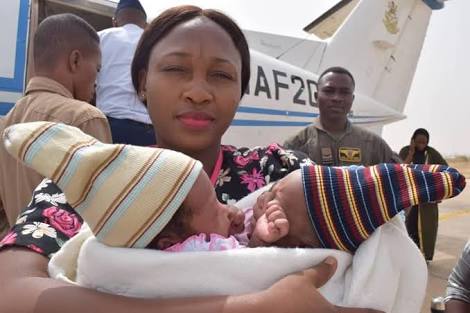 Mother of the conjoined twins who were successfully separated at the Federal Medical Centre, Adamawa,‎ Mrs Ayebaekipreye Ebinyefa, has revealed that people called her a witch as a result of the condition of the twins. ‎
‎
‎The twins, Grace and Mercy, were born cojoined on December 12, 2019, at Nembe General Hospital, Bayelsa State, and were later flown to FMC, Yola, where they were separated during an operation that lasted four hours on January 2, 2020.

Speaking on her arrival in Yenagoa with the twins on Saturday, Mrs Ebinyefa said she was called a witch after she gave birth to the conjoined twins.

Thanking God for the successful separation of the twins, ‎she said, “‎Before we went for the operation in Yola, I received insults and was tagged a witch. Some said the children came out conjoined because of my stubbornness and witchcraft. ‎

“While the operation was going on I prayed fervently because I cannot receive such wicked names and still lose the children. I handed over the operation to God and it saved me the evil blushes among my people.
‎
“I had faith in God and told him to take control.

“I want to appreciate our benefactor, Gabriel Jonah. He was God-sent to save me from death. Because without his intervention during the birth of the babies, we would have been killed.

“He took us from Nembe down to Yenagoa and eventually connected everyone involved with this success.

“In the last eight months, he has fed us and taken care of us up till this moment.”

All rights reserved. This post: '‎People called me a witch, mother of Bayelsa conjoined twins reveals ‎' and other digital content on this website, may not be reproduced, published, broadcast, rewritten or redistributed in whole or in part without prior express written permission from Anambra City News.