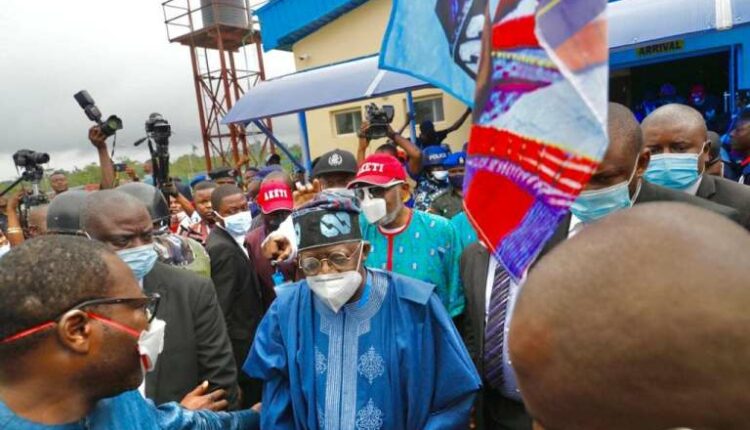 The National Leader of the All Progressives Congress (APC), Asiwaju Bola Tinubu on Saturday expressed optimism that Governor Rotimi Akeredolu will have a landslide victory in the October 10 gubernatorial election in Ondo state.

He dismissed the governor’s opponents in the election, including the main opposition party, the Peoples Democratic Party (PDP) as mere paper-tigers who will not make any meaning in the election and therefore asked APC members in the state not to dissipate energy fighting a dead party.

Tinubu who spoke in Akure said “you don’t fight the PDP. There is no point fighting a corpse inside the coffin, just settle down and calmly nail their coffin…”

He also praised Governor Akeredolu for showing genuine interest to ensure reconciliation among party members in the state, noting that without genuine reconciliation, it will be almost impossible to forge a united party ahead of the all important election.

“Unity and adherence to collective purpose are hallmarks of progressive politics. Our ability to place the public welfare above our personal ambitions is what differentiates us from the political regressives who would rather that the general welfare suffer so they can fulfil their personal whims and wishes.

“As progressives, we must carefully tend to our bridge of unity. We must never allow it to break. We entered politics and governance to serve the people and this purpose should always bind us in ceaseless fraternity and togetherness.

“All true progressives must work towards this fertile unity and sustain that unity. With it we can achieve the great things we see for this state and this nation. We can build a progressive society for ourselves and our children.

“Without that unity, we will forever be in a blinding fog, so much so that we will be fighting friend and foe alike because we will be too confused to know the difference between the two. This is no path to greatness. It is the path to stagnation,

“ Lets us commit ourselves to progressive unity to bring forth a progressive society. There is no other way for this nation to go. We must bring all our people back under the same progressive tent. Our creed is one of public service.

“This service is blind to region, religion, ethnic group or place of origin. We seek prosperity, safety, hope and the tranquil enjoyment of life for everyone, for all Nigerians.

”For us as progressives, tribalism and sectionalism are not part of our working vocabulary. Those are the words of yesterday. We all must work together and forge ahead as one if we are to attain the country’s overall development goals.

“lt is against this context, that my actions regarding Ondo must be weighed. The governor had showed that he wanted genuine reconciliation among party members in the state.

“As part of this trust-building process, the governor was asked to extend a hand of fellowship to those who felt aggrieved and to embrace all the leaders within the state chapter of the party so that our progressive front would again be solid and strong.

“Here, I must offer a confession. When some of our members sought to reach me before the primaries to raise questions regarding Governor Akeredolu, I made myself unavailable.

“I did not do this to hurt or insult anyone. Here I ask that none of you be offended. I did this because I know the depth of character and the high quality of the leaders of this state’s chapter. You are all my brothers in whom I repose greater confidence.

“Thus, I knew that you all would work all important things out among yourselves. And, with but a little nudging and encouragement from me and others, you would reach the point where reconciliation would begin.

“True to my high estimation of your principles and political astuteness, you all began to reach out to each other and work together toward a common and good cause – the continuance of progressive governance in Ondo under the banner of the APC.

“l thank God that such a number of excellent and wide leaders are in our party. As such, Governor Akeredolu is the first among equals which means all of you must continue to dialogue and the door of consultation must remain open that our governor in his second term can rely on our collective wisdom to bring even more improvement to the state.

“Today, we have a united All Progressives Congress in Ondo. United toward achieving victory in the governorship election. United in the developmental work that must be done after the election.

Tinubu commended leader of the defunct Unity Forum and other governorship aspirants who have endorsed Akeredolu for a second term and those who have indicated their readiness to withdraw their cases from court.

“l cannot thank all of you enough. We are in this battle together, more importantly, we are one the same side of it.

“The fight is not only to ensure the re-election of Governor Akeredolu but to establish a progressive government where we are capable of doing so.