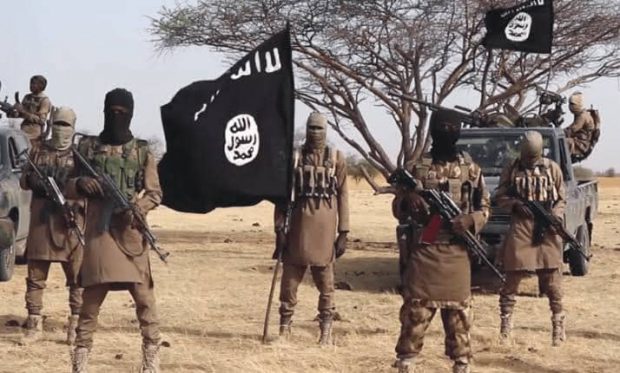 ISIS in Africa (ISWAP) has executed 20 prisoners that had been sentenced to death by the Chief Judge and his council, sources have announced.

Those executed according to the source included one Ba’a Masta, an Islamic Scholar who preached in the Tumbus; two Nigerian Army soldiers (names withheld) and one individual known only as John, described by sources as ‘an Igbo man‘ who was abducted on suspicion and allegation of “looking like a spy.”

Sources said the executionsn were carried out immediately after Eid-el-kabir prayers at their Central Mosque in Tudun Woulgo, parts of the terrorist hideout.

The source said the executions took place in a typical jihadists fashion amidst wild jubilation by hundreds of the insurgents compelled to watch which comprised of jihadists fighters and young children chanting “Allahu Akbar!”

A ring-like structure of cheering crowds of men and children that witnessed the executions included some top and key members of the ISWAP leadership, amidst very tight security.

The source stated that the manner of the execution was unimaginable as the men were brutally murdered with knives used to dismember their heads in the most inhuman manner.

The jihadists had promised to execute about 14 individuals including some key commanders on the 31st July 2020, after the notorious warlord, Amir Baba Kaka, was executed at Kwalaram close to Kwatan Marghi.

Amir Kaka was killed on the evening of Sunday 26th July 2020 along with two of his lieutenants; Amir Muhammed Lawal AKA Abba Lawal and Amir Musa.

The source further recalled that the jihadists’ leadership had planned to carry out the execution of the individuals at a location that had previously been given as Tunbum Kurna but for some inexplicable reasons the actual location of the dastardly execution was changed to Tudun Woulgo.

“Meanwhile the jihadist leadership chaos continues to destabilise the Boko Haram terrorists and ISWAP structure in the Lake Chad region”, the source said.

This is following internal power struggles made worse by the recent sustained land and aerial coordinated offensives against the terrorists by the Nigerian Army commanded by Lt Gen.Tukur Yusufu Buratai; the Chadian Army under President Idriss Derby and the regional Multi-national Joint Task Force (MNJTF) troops.

The successful offensives were mostly targeted at the Jihadist strongholds, particularly in Tumbun Gini.

Thousands of Boko Haram terrorists and ISWAP fighters and their commanders have recently been eliminated forcing a complete overhaul of ISWAP leadership and independent groups turned bandits.

Some of the criminals spilled over to the North-West geo-political zone of Nigeria to align and terrorize the vulnerable population.

The summary executions of some of the top jihadist leaders and other captives are part of an ongoing cleansing among the terrorists.

It is also aimed at consolidation exercise by the most recent ISWAP leadership of Ba Abubakar Lawan and the return of Abu Musab Albarnawi to ISWAP high command.

The source said a video clip of the executions will be released soon by the terrorists.

Furthermore, he said, “In view of these developments in the theatre, all local and regional stakeholders must engage each other.

“They need to collectively collaborate further towards a common goal of achieving complete and sustainable defeat of terrorists and criminal elements hibernating in some parts of the north eastern and north western of Nigeria.

“All hands should be on deck among the armed and security forces of Chad, Cameroun, Niger and Nigeria. Citizens and government must support the military and security forces to succeed. “It is a collective and People’s War! No room for bickering or distractions”, the source added.