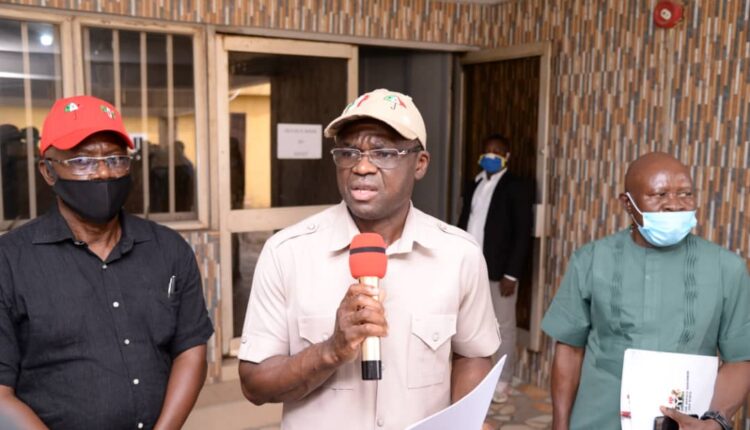 Edo State Deputy Governor, Comr. Philip Shaibu, on Monday, petitioned the Edo Police Command and the Department of State Services (DSS) seeking the prosecution of the sacked National Chairman of the All Progressives Congress (APC), Adams Oshiomhole and the APC gubernatorial candidate, Osagie Ize-Iyamu, for allegedly recruiting and arming youths ahead of the September 19, 2020 governorship poll and the death of five APC youths who were shot during the party’s campaign rally in Ikhin, Owan East Local Government Area of Edo State.
Briefing Journalists in Benin City shortly after submitting the petition, Shaibu urged security agencies to take action and bring the duo to book, so that the state can have peace, adding that their desperation for power portends bad omen for the state.
The deputy governor alleged that Oshiomhole is plotting to set the state ablaze in connivance with his party’s gubernatorial candidate, noting that both of them have verifiable history of recruiting armed thugs to prosecute elections.
According to him, “I have to cry out because I know both of them very well, even in the dark; I can clearly identify their hands. I am concerned because if not checked, it portends grave danger for our state, before, during and after the September 19, 2020 gubernatorial election.
“I believe you are all aware of the recent killings in their camp, where five members were mauled down in Ikhin, Owan West Local Government Area of the state.
On Friday, August 14, 2020, the youths gathered in Ikhin to share money after their poorly organised rally in Afuze. A disagreement within them led to the shooting that resulted in the death of five youths. The question here is, who armed the youths to kill themselves? This clearly shows that the APC former national chairman has pushed out so much arms in readiness for the election as they have nobody on ground supporting them.
“I fear for our youths and those from the neighboring states who are being recruited and armed to go kill themselves. I want to advise parents to pay more attention to the whereabouts of their sons and the type of company they keep during this period because these two men don’t care about the safety of lives and property of others but about their personal ambition.”
Shaibu continued: “I don’t believe we should shed blood of these innocent youths because of our personal ambition. I am not just raising false alarm; I know both of them very well like the back of my palm.
“Ize-Iyamu was the one who organised an alleged notorious thug, Shabba and his boys to attack me and my family when I was in the Edo State House of Assembly; these perpetrators are still walking freely in the streets without prosecution.
“Oshiomhole himself organised a deadly attack on Governor Godwin Obaseki, myself and the Oba of Lagos, Rilwan Akiolu and other top dignitaries during the convocation ceremony in Edo State University, Iyamho.
“The recent allegation against me that I was planning to attack my own convoy is the handiwork of this old man, using one Osa and Odion Idahosa under the guise of a faceless group. These guys have to be arrested and prosecuted; this is a challenge to the police.”
“In view of this catalogue of atrocities committed by Oshiomhole and Ize-Iyamu, I want to urge the security agencies to take action now and bring them to book so that Edo can have peace, otherwise, their desperation and thirst for power portends bad omen for our dear state,” Shaibu noted.

All rights reserved. This post: 'Shaibu petitions Police, DSS, seeks arrest of Oshiomhole, Ize-Iyamu for arming youths to cause violence' and other digital content on this website, may not be reproduced, published, broadcast, rewritten or redistributed in whole or in part without prior express written permission from Anambra City News.