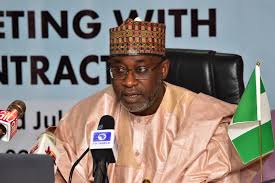 By Ikechukwu Odu
Worried over the continued delay in the completion of the 2.6 billion naira Adada Dam project, Nsukka Zonal Forum has written the Minister of Water Resources, Engr. Sulleiman Adamu to ensure the completion of the dam.
In a letter signed by the Chairman and Secretary of the Forum, Chief Chijioke Attah and Bar. Chidi Onah, the group reminded the minister that the project initially scheduled for completion in 24 months has lingered for nine years without any hope in sight.
The group frowned at the slow pace of work on the project that was conceived to address the water and irrigation needs of Enugu North Senatorial zone and beyond.
According to the Forum, the project was awarded in 2011 in two-phases including damming of the Adada river and piping, but nine years down the line, the first phase of the project was yet to be completed while the second phase remained largely on the drawing board.
While speaking to our reporter, the project engineer, Justin Ihedioha, blamed paucity of funds for the undue delay in the completion of the project.
According to him, the contractor, ROUDO Nigeria Ltd has remained on site since the contract was awarded, pointing out that 95 percent of the first phase of the project had been completed.
He assured that any time funds were made available, the project would be completed.
The Adada dam project which was single-handedly attracted by Senator Ayogu Eze as the Senate committee chair on works was conceived to address the perennial water problems of Nsukka and beyond while serving the irrigation needs of the mainly agrarian communities that populate the zone.
The Nsukka Zonal Forum has therefore called on the current senator representing Enugu North Senatorial District, Chuka Utazi to rally round his colleagues at the National Assembly to ensure that the project continued to recieve budgetary allocations because of its importance to the constituents upon completion.

All rights reserved. This post: 'Group worried over delay in completion of Adada Dam project' and other digital content on this website, may not be reproduced, published, broadcast, rewritten or redistributed in whole or in part without prior express written permission from Anambra City News.