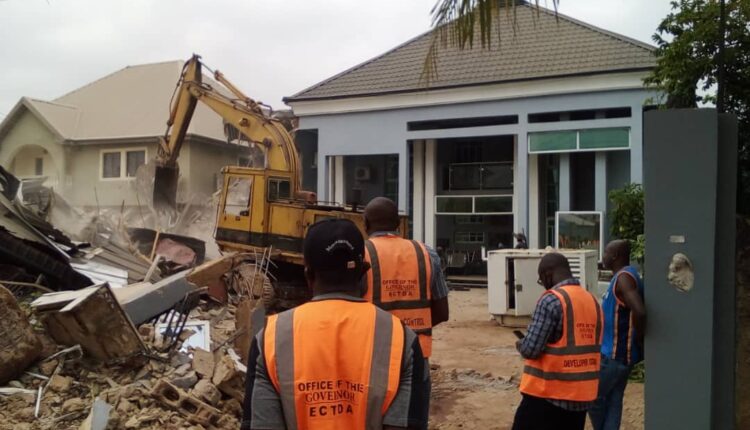 The man whose twin-duplex was demolished by the Enugu State government after he also pulled down the fence of the Akanu Ibiam International airport, Mr. J. J. Emejulu has called for peaceful settlement of the dispute.

Minister of Aviation, Hadi Sirika had expressed sadness at the news of the pulling down of the airport fence and vowed that the federal government would do all in its powers to bring the perpetrator to justice.

Emejulu’s lawyer, Chief G. Tagbo Ike said in a press release he issued in Enugu on Tuesday that his client was ready for peaceful resolution.

“Arc.J. J. Emejulu thanks the Media and tows peaceful settlement of disputes”, urged the media to stop further publications on the land disputes to enable him and his team of lawyers seek ways of resolving the matter through peaceful means.

“The attention of Arc. J.J. Emejulu has been drawn to spate of  reports and commentaries   by   on-line   news   media,   diverse   platforms   and   blogs concerning his two disputes with Government of  Enugu State in two fronts: Residential   house   at   Eziokwe   Street,   Nike,   Enugu   and   Airport   Layout, Phases  IV & V, Enugu.

“Our client, Arc. J.J. Emejulu appreciates the outpouring of concerns and solidarity of the press and social media at his tribulations and interface with Government of Enugu State, and calls on the press and social media to observe a cease fire, and put a total stoppage of  reports or  commentaries to enable  him and his team of lawyers to pursue peaceful settlement of the two disputes with Government of Enugu State of Nigeria.

“All   news   media   (print   and   electronic)   and social   media   are   by   this notification advised not to publish or attribute  any report  to him as he is not answerable  or liable to it.

“Our client uses this opportunity to inform the general public   that he has seized   with   both   hands   the   opportunity   for   peaceful   resolution   and reconciliation with the Government of Enugu State; and urges Governmentof Enugu State’s media officers to observe the media truce in aid of on-going settlement.”