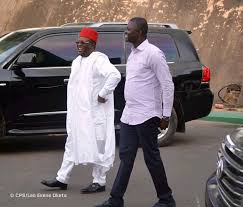 What initially started as a rumour is fast becoming a reality as strong indications emerged on Monday that Governor Dave Umahi of Ebonyi State, the 24 members of the State Assembly and 13 local government chairmen may be on their way to the All Progressives Congress (APC) in the coming days.

A member of the House of Representatives from the state, Comrade Chinedu Ogar had flown the kite on Saturday declaring that the governor had already left the Peoples Democratic Party (PDP) after meeting with President Muhammadu Buhari and leaders of the APC.

The governor however dismissed the claims as false, declaring that he still remained a member of the PDP.

But on Monday, the Speaker of the Ebonyi State Assembly, Francis Nwifuru handed the leadership of the PDP a one-week ultimatum to either zone the 2023 presidential ticket of the party to the South East or face dire consequences.

The speaker told newsmen that the lawmakers were no longer ready to sit idly while the party continued to toy with the political destiny of Ndigbo, when they had several competent hands to lead the country after President Buhari.

“The unity of our beloved country, Nigeria, has always been hinged on the principles of equity, justice, and fairness. It is on such conventional wisdom that the country has striven to grow and develop equally across all her geopolitical zones.

“In furtherance of the above principles, we, the Honourable Members of the sixth (6th) Ebonyi State House of Assembly, wish to draw the attention of our great Party, the Peoples Democratic Party (PDP), to the rightful yearning of our industrious and peace-loving people of the southeast Nigeria, that the position of the President of the Federal Republic of Nigeria come 29th May 2023, be zoned to the South East.

“Since the inception of this democracy, the zone has paid its dues having worked assiduously and massively voted for all the presidential candidates of our great party – Peoples Democratic Party (PDP), when the people of the South West in the year 1999 and 2003, the people of North West in 2007, the people of South-South in 2011 and 2015, the people of the North East in 2019, all contested for Presidency.

“It is on record that since the inception of democracy in this country, from 1999 till date, the five (5) States of the South East have always delivered the presidential candidates of our great party, the Peoples Democratic Party (PDP), 100 per cent.

“It is only appropriate in the spirit of democracy, equity, justice, and fairness that the position of the President of the Federal Republic of Nigeria come 2023, be zoned to the South East. “South East has presidential personalities, people who are globally renowned, reliable, acceptable, tested and trusted to the position; having discharged their duties efficiently and effectively in the positions held before now.

“Persons like Peter Obi (Former PDP Vice Presidential Candidate in the 2019 elections and former Governor of Anambra State), Sen. Anyim Pius Anyim (former Senate President and former Secretary to the Government of the Federation), Sen. Ike Ekweremmadu (former 3-time Deputy President of the Senate), Sen. Theodore Orji (former Governor of Abia State), Achike Udenwa (former governor of Imo State), and a host of others. So we have qualified people who are very much available for this position.

“We did not mention our Governors not because they are not qualified but these highly qualified persons are not holding positions currently and there are other eminent qualified Igbo leaders as well who are trusted, competent, capable and reliable. That tells you, gentlemen of the press that we are not asking for what we don’t have, so our party should not turn this request down.

“On this note, we are giving our great party, the Peoples Democratic Party (PDP), 7 days ultimatum to convocated the National Executive Committee of the party and zone the position of the Presidency to southeast Nigeria, especially as INEC has officially announced the date of the presidential elections.

“In no minimal measure, this will further develop and unite our dear country.

“Failure to adhere to these kind requests will cost our party heavily and we, the Honourable Members of the 6th Ebonyi State House of Assembly will leave no stone unturned in taking decisive actions to ensure that traditions and dividends of democracy are respected in our party.”

All rights reserved. This post: 'Umahi, Ebonyi lawmakers, Council Chairmen set to dump PDP for APC' and other digital content on this website, may not be reproduced, published, broadcast, rewritten or redistributed in whole or in part without prior express written permission from Anambra City News.