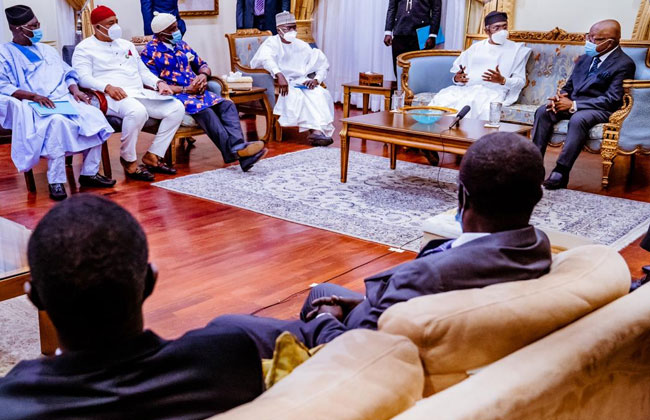 The Speaker of the House of Representatives, Femi Gbajabiamila has advocated for an amicable settlement of trade disputes between Nigerian traders and Ghanaian authorities through arbitration and fair judicial processes.

The speaker who is on a two-day legislative diplomatic mission to Ghana also asked that the component of the law that requires a capital base of $1m for businesses to start should be revisited, even as he made other far reaching proposals that would to large extent help in resolving the ongoing attacks on Nigerian traders doing business in Ghana.

A statement issued on Thursday by the Special Adviser to the Speaker on Media and Publicity, Lanre Lasisi quoted the speaker as saying that as African, Ghana should encourage brotherliness.

The statement further noted that the speaker made his views known during his meeting with Ghanaian lawmakers and some top government officials as part of his current visit to Ghana to resolve the crisis.

Gbajabiamila called for an amicable settlement of trade disputes through arbitration and fair judicial processes.

The Speaker also said he would be glad to champion a law to improve the bilateral trade relations between Nigeria and Ghana, noting that citizens of the two countries remain brothers and sisters.

He said, “First, amicable settlement of trade disputes through arbitration and fair judicial processes. In this context, we do believe that while it is the sovereign right of the government of Ghana to pass and implement the GIPC Act, we would implore you to explore alternative and less aggressive options of engaging, sanctioning and relating with our traders and business people who operate in your country, pay taxes and contribute to the development of both our nations.

“Secondly, we would encourage you to revisit the component of the law that requires a capital base of $1,000,000. We are all Africans, we all have towns and villages, and we know only too well that majority of our traders across the continent are petty traders. The prospect of them being able to raise a capital base of $1,000,000 before they can trade in goods that may be worth less than $1,000, clearly is a major challenge.

“Thirdly, one of the things we are all proud about and the common surname that we all bear is ‘ECOWAS’ and as you know, by virtue of being ECOWAS countries, our nations and our citizens should be able to live, work and thrive in any of our nations without any form of hindrance or discrimination.

“It is in this light we would encourage that we explore how the principles and the application of ECOWAS protocols – which we are both signatories to – may perhaps conflict with the application of the GIPC Act, especially vis-à-vis the recent adoption of the African Continental Free Trade Agreement by African nations; and the movement towards a single currency in the West African subregion.

Also, the statement quoted the Ghanaian Minister of Trade and Industry, Alan Kyeremateng, as saying there are many Ghanaians and Nigerians who are going about their lawful businesses without difficulties, noting that the situation where some shops were locked up must have risen out of situations where there were clear abuses of the application of the laws.