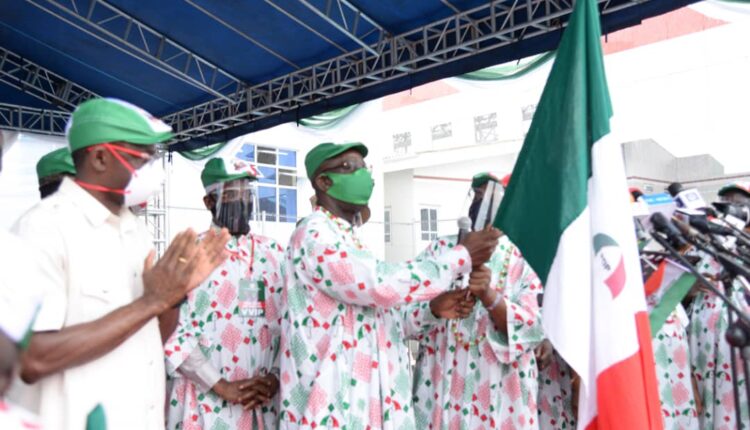 The Edo State Governor and candidate of the Peoples Democratic Party (PDP) in the September 19 governorship election, Mr. Godwin Obaseki, Saturday, declared that he is certain of victory while unveiling the Make Edo Great Again (MEGA) plan to Edo electorate.

The governor made the declaration at the flag-off of his governorship election campaign at the Lawn Tennis Court of the Samuel Ogbemudia Stadium, Benin City, Edo State, after a courtesy visit to His Royal Majesty, Omo N’Oba N’Edo Uku Akpolokpolo, Oba Ewuare II, the Oba of Benin.

Dignitaries at the event include governors drawn from the South-South region and other parts of the country including Ifeanyi Okowa, Aminu Waziri Tambuwal, Nyesom Wike, Duoye Diri, Seyi Makinde and Sen. Bala Mohammed of Delta, Sokoto, Rivers, Bayelsa, Oyo and Bauchi states, respectively.

According to Governor Obaseki, “I am happy today that I have been given the party’s flag to contest the governorship election on September 19, 2020. I did it before and will do it again. We would focus on improving governance to transform the lives of our people. In the next four years, Edo would continue in the quest to become the economic hub of the nation.”

The governor unveiled the programme for his second term bid titled Make Edo Great Again (MEGA), which he said would prepare the state for a post-coronavirus (COVID-19) world.

He noted, “We are saying that we will, working with you, make Edo great again. Our message is one of hope and the future. We are one people; we have one dream and one heritage. The blood of our forefathers who built an empire and dominated their space still runs in us today. If they were able to achieve what they achieved over 500 years ago, we will achieve much more today.”

Explaining the focus of the campaign’s MEGA theme, he said: “The plan we have adopted will focus on how to use governance to support our people. We will use government to create enabling business environment so that Edo people can do their business without being harassed by anyone, especially thugs.

Responding to attacks by thugs at the Oba’s Palace earlier in the day, he said, “The opposition has now resorted to violence. Please we do not want bloodshed. I hear they are destroying cars with PDP flags. Do not retaliate. God will retaliate for us. Their strategy is to scare the people. They are saying that what they did today is a sample of what they intend to do on September 19.”

On his part, Chairman of the Peoples Democratic Party (PDP) national Governorship Campaign Council for Edo 2020 gubernatorial election and Governor of Rivers State, Nyesom Wike, urged all Edo people to come out en masse to cast their votes for Governor Obaseki and equally protect their votes to return the governor in office, to enable him continue his good work for the majority of the people.

Wike noted: “The APC, for me, does not have any credible candidate. Also, Osagie Ize-Iyamu, according to the sacked National Chairman of the APC, Comrade Adams Oshiomhole, is a thief.”

“Don’t allow your votes to be rigged as APC believes in rigging. I want to assure you this time that this election will be difficult to rig. South-South is for PDP and Edo belongs to PDP. Edo people should not allow Edo to be rigged. I urge you to defend your votes and ensure Obaseki is returned for a second term to continue his good works in the state.”

Also, Governor of Delta State and Chairman of South-South PDP Governors’ Forum, Ifeanyi Okowa, urged Edo voters to reject the antics of Oshiomhole, the APC and its candidate, Ize-Iyamu, adding: “Looking at the debt Oshiomhole left for the state, I pitied Obaseki but as a technocrat, the governor did well and has greatly reduced the debt burden of the state, and has put Edo on the path of development.

Meanwhile, Governors of Bauchi and Oyo states, Sen. Bala Mohammed and Seyi Makinde, described Obaseki as a resource person that has represented the state and nation well.

Tambuwal added: “No single individual can decide the fate of Edo people as no one man is superior to Edo people.”

All rights reserved. This post: 'Edo 2020: Obaseki unveils MEGA plan as PDP flags-off Campaigns ' and other digital content on this website, may not be reproduced, published, broadcast, rewritten or redistributed in whole or in part without prior express written permission from Anambra City News.