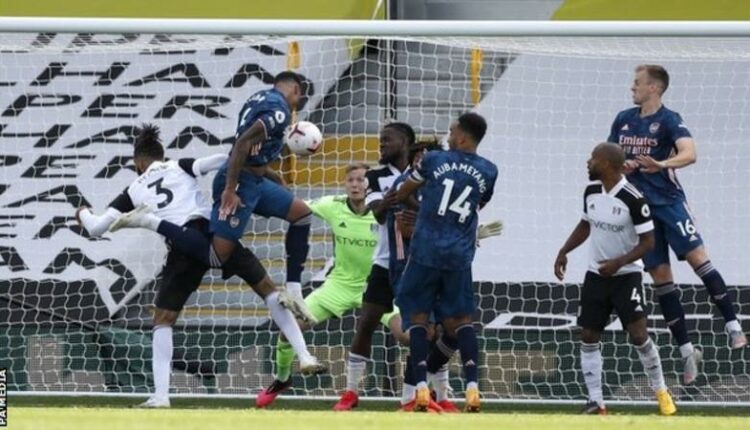 Debutants Gabriel and Willian impressed as Arsenal blew away promoted Fulham in the opening game of the Premier League season.

Former Chelsea winger Willian had a hand in all three goals and Gabriel – a £23m signing from Lille – scored in his first game in English football.

Arsenal were highly impressive, while Fulham caused themselves too many problems at the back.

Both sides have played and won at Wembley – twice for the Gunners – in the 48 days since the last Premier League season finished.

Alexandre Lacazette scored the opener from close range after Willian’s effort was saved.

Centre-back Gabriel then scored from Willian’s corner with his shoulder. Willian, who also hit a post from a free-kick, picked out Pierre-Emerick Aubamayeng with a perfect cross-field ball and the captain curled home Arsenal’s third.

Fulham created few chances, with last season’s top scorer Aleksandar Mitrovic coming on with only 27 minutes to go and forcing Bernd Leno into a save.

There were signs of improvement under boss Mikel Arteta last season, with Arsenal showing a new defensive solidity and looking confident going forward.

They won the FA Cup final and Community Shield – against Chelsea and Liverpool respectively – at either end of August.

Despite a pre-season break of less than a month, they are in good shape if this performance is anything to go back.

All rights reserved. This post: 'Debutants Gabriel, Willian shine as Arsenal down Fulham in season’s opener' and other digital content on this website, may not be reproduced, published, broadcast, rewritten or redistributed in whole or in part without prior express written permission from Anambra City News.