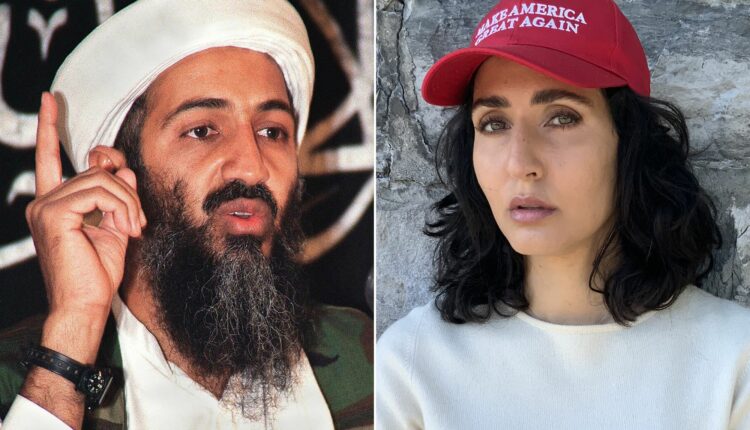 Noor bin Ladin, who grew up in Switzerland, has given her backing to the US President, saying she wears a ‘Make America Great Again’ hat in spite of critics who have branded her ‘stupid’

Noor Bin Ladin, niece of the notorious terrorist – who was shot dead during an operation ordered by Trump’s predecessor Barack Obama – said that the Republican “must” remain at the White House.

Ms Bin Ladin said she is a huge fan of the current US President and wears a ‘Make America Great Again’ hat around Switzerland, where she lives.

She told the New York Post : “I have been a supporter of President Trump since he announced he was running in the early days in 2015.

“I have watched from afar and I admire this man’s resolve.”

She claimed that ISIS grew in stature while Obama and Vice President Joe Biden – who is standing against Trump in November – were in charge.

And she claimed that re-electing the US President is crucial in preventing another huge terrorist attack.

“Trump has shown he protects America and us by extension from foreign threats by obliterating terrorists at the root and before they get a chance to strike,” Ms Bin Ladin – who spells her name differently from the 9/11 mastermind.

She claimed that the US had “aligned itself” in the ideology of radical Islam, and said it is “vital” that Trump is re-elected.

Ms bin Ladin said that he has been called “stupid” by critics berating her “beloved president” in Switzerland.

She said she was “devastated” by the 9/11 attack carried out by her uncle and his supporters.‎

All rights reserved. This post: 'White House: Osama bin Laden’s niece backs Trump ‎' and other digital content on this website, may not be reproduced, published, broadcast, rewritten or redistributed in whole or in part without prior express written permission from Anambra City News.