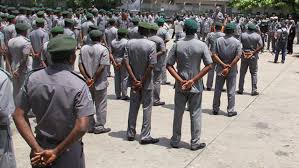 0
Share
The Nigeria Customs Service has raised the alarm over what it described as plans by Boko Haram terrorists to attack selected targets in Abuja, the Federal Capital Territory.
The NCS raised the alarm in a ‎notice with reference NCS/ENF/ABJ/180/S.I/VOL.II, issued by the Comptroller, Enforcement Headquarters, H.A. Sabo, in Wuse Zone 3, Abuja.
In the notice, the organisation ‎asked its officers to stay alert in Abuja as there are Boko Haram terrorist camps in and around the FCT. ‎
P‎arts of the notice dated August 20, 2020, ‎and titled ‘Intelligence on National Security’, read, “Information reaching the Comptroller-General of Customs revealed the existence of Boko Haram terrorist camps in and around the Federal Capital Territory.
‎”Consequently, you are to be at alert and security conscious of your environment at all times. Ensure wide circulation please.”
‎
The notice disclosed that there are terrorist‎ camps in Kunyan Bush along airport road, off DIA Staff Quarters, Abuja, Robochi/Gwagwalada forest, Kwaku forest in the Kuje area of Abuja and Unaisha forest in the Toto Local Government of Nasarawa State.‎