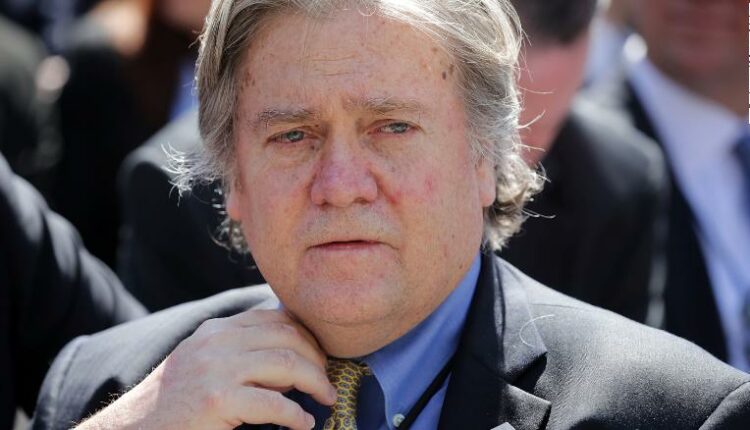 Former close associate of President Donald Trump of the United States, Steve Bannon has been arrested and charged along with three others for defrauding hundreds of thousands of donors in a Mexico border wall fundraising campaign.

The development is considered to be a major setback for the president who is seeking for reelection.

The online crowd-funding campaign known as “We Build the Wall” raised more than $25 million, prosecutors said, which the defendants said would be used on construction but was instead used for their own profit.

The arrest is the latest in a string of high-profile legal battles faced by members of Trump’s inner circle.

Manhattan federal prosecutors said Bannon, the organization’s founder Brian Kolfage, Andrew Badolato and Timothy Shea “received hundreds of thousands of dollars in donor funds from We Build the Wall, which they each used in a manner inconsistent with the organization’s public representations.”

The initiative began in 2018 as a GoFundMe campaign to raise money organizers said would go towards the border wall Trump had promised during his 2016 campaign, which Bannon orchestrated.

Kolfage, a 38-year-old based in Florida, had vowed that all funds raised would go to the wall and he would not take compensation — but according to the indictment, he took more than $350,000 for his own use and worked to hide his actions.

After calling the effort a “volunteer organization,” Bannon, 66, received over $1 million of the donations which he funneled through a non-profit he controlled, using some of it for his personal expenses, prosecutors said.

“Not only did they lie to donors, they schemed to hide their misappropriation of funds by creating sham invoices and accounts to launder donations and cover up their crimes, showing no regard for the law or the truth,” said Philip Bartlett, head of New York’s division of the US Postal Inspection Service which worked on the investigation.

Once a prominent voice in the president’s ear, Bannon was behind some of Trump’s most controversial moves, including his ban on some travelers from abroad and the decision to pull the United States out of the Paris climate change agreement.

After frequent clashes with others in the White House including Trump, Bannon was pushed out in August 2017.

All rights reserved. This post: 'Ex-Trump aide, Bannon, 3 others arrested over $25m fraud' and other digital content on this website, may not be reproduced, published, broadcast, rewritten or redistributed in whole or in part without prior express written permission from Anambra City News.